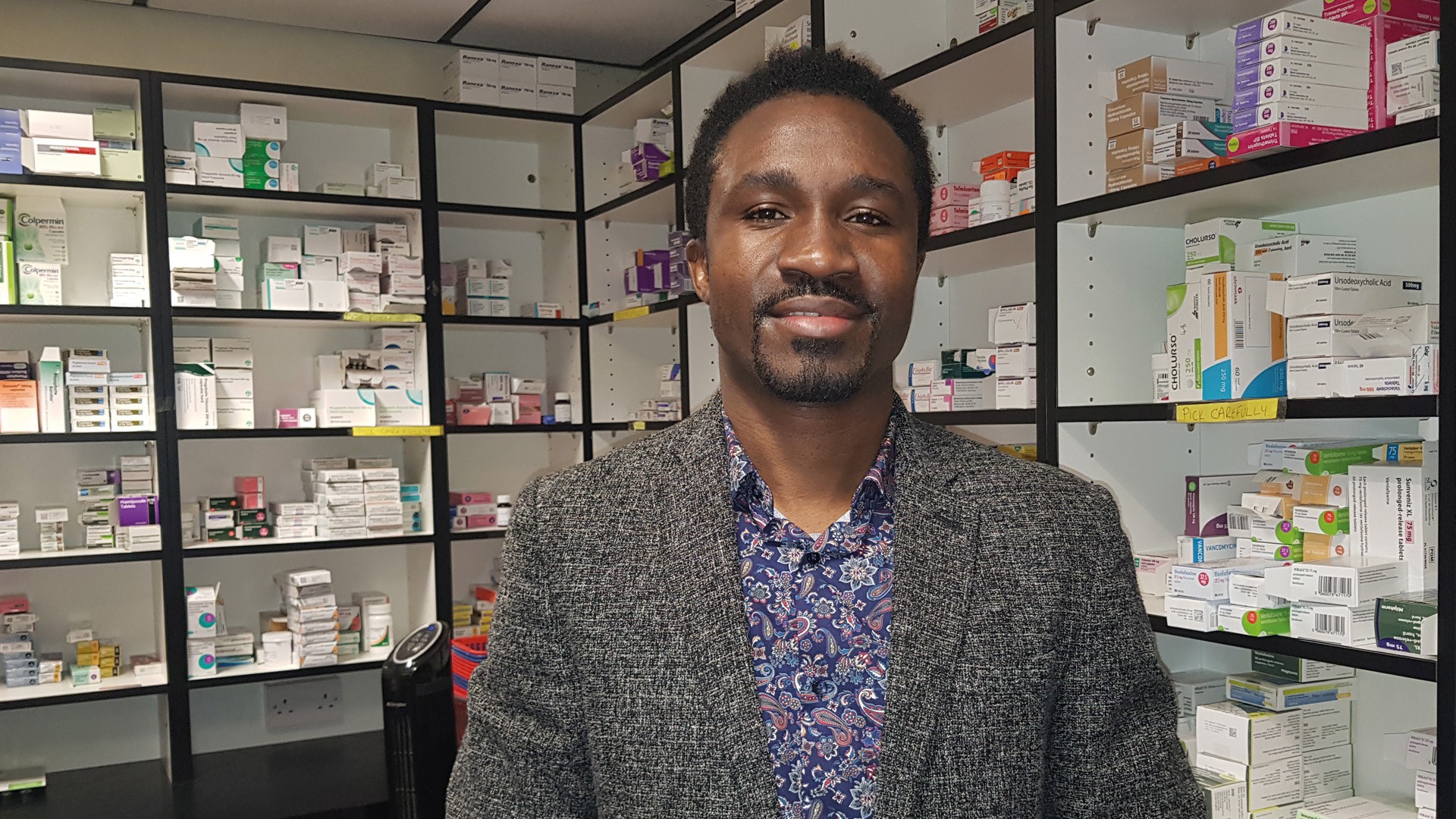 Originally from Uganda, Robert Musimbago came to the UK four years ago to begin a career in community pharmacy that has proved to be a source of great joy

Robert Musimbago has come a long way in the last four years – in more ways than one.

Back in 2017, Robert was a research associate pharmacist at a National Institutes of Health Division of AIDs study in Kampala, Uganda, when he had a change of direction and moved to the UK.

Having arrived in Liverpool, he took the initiative and called a pharmacy in the city, explaining that he was an overseas pharmacist and needed a job. “They took me on as a dispensing apprentice,” he recalls. Now, four years on, Robert works as a dispensing assistant at Elliott Street Pharmacy – a Numark member – in Tyldesley,  Manchester. “I love working in small, winning teams, and community pharmacy has been able to offer me that,” he says.

Robert has been at Elliott Street Pharmacy for three years now, and he cannot praise his fellow team members highly enough. “We’re like family,” he says. “We love and care for each other. We crack jokes and laugh about things. We celebrate birthdays, weddings and yet, above all, we get everything done to keep our customers satisfied.”

There are 20 staff at the pharmacy and Robert says their greatest strength is the management team. “They are fantastic. They care about you and not just about what you do for them,” he says. “They demonstrate leadership that inspires a good work-life balance, and they create a relaxed atmosphere that fosters learning and productivity.”

In terms of productivity, the management team recently made a decision that has had a great impact: they implemented Numark’s Golden Tote repeat dispensing system.

Golden Tote essentially allows independent pharmacies to have an automated repeat prescription dispensing business as a free add-on to their existing PMR. Numark saysww it “radically improves the dispensing process” for its members, but what does Robert think?

“It has definitely made our jobs easier in terms of reduced energy spent for the same workload,” he says. “With Golden Tote, you stand or sit in one place and scan all the items and bag them there and then, whereas we used to have to keep moving around to pick items before we could dispense them, which wasn’t as time efficient.”

The fact that the process is more time efficient means the team now finishes the weekly repeat dispensing load a lot earlier than before. “Because of the introduction of Golden Tote, we have more time to make blister trays now,” says Robert. “The dispensary also looks more organised and generally less crowded.”

The thought of moving to an automated system might seem daunting to some, but Robert says it was easy to learn. “It is incredibly user friendly. Immediately after the first lesson, I was good to go and felt I had a good understanding of the system,” he adds.

The joys of the job

Although most of his time is spent in the dispensary, Robert does have regular customers that he knows well. “Good customer relationships should be the wheels that run any business,” he says. “I treasure every encounter I have with our customers. One particular customer picked up their medication, which included about 84 bottles of Ensure, Laxido and various creams, which were quite heavy together. I helped her load them into the boot of her car and she couldn’t thank me enough.”

Robert says customers are grateful that the pharmacy has changed the way it handles repeat dispensing as the service they receive is of such a high standard. “They always refer to us as ‘the best chemist’,” he says. “And because most items are dispensed via Golden Tote now, repeat prescriptions are ready on time and there is reduced waiting time for clients who walk in with prescriptions as they receive immediate attention.”

Aside from dispensing, Robert’s day-to-day responsibilities can include anything and everything. “I’m always glad to participate in wider tasks that aren’t necessarily within my ‘on paper’ job description,” he says. “There are so many positives to take away from this job and feeling able to help people is a massive bonus.”

However, dispensing is his core role, and it is one that he loves. “I look at it this way: for every monthly prescription I dispense, I have just provided a month of joy, peace and comfort to someone,” he says. “I love dispensing life; every prescription is a life – it is so fulfilling.”

Elliott Street Pharmacy is open from 8am until 10.30pm Monday to Saturday, and is also open on Sundays. This not only benefits local people by offering an easily accessible healthcare service seven days a week, it also has benefits for staff. “It means I can have varied shifts, which makes it easier to achieve a good work-life balance,” says Robert.

When he does have time to relax, Robert likes to read the Bible and other inspirational books. “I also really enjoy sight-seeing around the UK and am a keen boxer,” he says.

But he may not have so much free time soon. “I have been offered an MSc placement for Pharmaceutical Engineering at the University of Sheffield, starting this month,” he explains. “I’m hoping to move into pharmaceutical manufacturing within the next five years.”

The TM team wish Robert well on the next part of his journey!