Theresa Collins had a track record of supporting the wellbeing of others well before she joined community pharmacy, through her previous role as a hairdresser. It might not sound like the most obvious connection, but she says that there are more similarities than one might think. “People talk to their hairdresser far more than they talk to anyone else,” Theresa boldly explains. “So, within my hairdressing years I actually physically took people to the doctors myself when they came in poorly.”

In 2010, after selling up shop and moving away from full-time hairdressing, Theresa went back to college to bring some of her skills up to speed – including maths, English and business – and find a new career. She briefly considered teaching hairdressing at a local college, however, when she saw an opportunity to work at a local Asda Pharmacy, she hoped it would be a good fit.

As she suspected, it was a role that came quite naturally to her, and the fact that she could be a freelance hairdresser on the side made it all the more appealing.

Putting in the hours

Joining this Asda Pharmacy in 2012 marked Theresa’s entry into the world of community pharmacy. She joined as a medicines counter assistant and then became a dispensing assistant, completing Buttercups training. From there, she moved to a Sainsbury’s Pharmacy in Bury St Edmunds in 2016, just before it was taken over by LloydsPharmacy, and it was here that she soon progressed to a managerial role.

Then, just last October, determined to strike a better balance between her work and home life and in search of a new challenge, Theresa became a relief dispenser for Day Lewis Pharmacy. “I cover 10 stores over Norfolk and Suffolk, going where I am needed most,” she explains. “Pharmacies currently have people off on sickness, maternity or childcare, often because of Covid. Sometimes I get notice of where I am going to be, sometimes I don’t, which makes it more interesting.”

Theresa says this move has meant she has had to re-establish how she manages her days due to a stark change in the hours she works. “There is a big difference between the supermarket pharmacy and a [community] pharmacy. In the 100 hours [at a supermarket pharmacy] you have got far more time to do the paperwork side of things, to catch up and you can contact patients at a weekend. You have just got more ability,” she explains. “In the community pharmacy, you have to plan the day really well so that it flows, work as a team and get everybody involved.”

This daily planning, alongside regularly switching stores, has been a challenge, but one that Theresa has embraced and really enjoys.

One thing that remains the same, however, is the level of care Theresa gives her customers on a one-to-one basis. “I used to love doing the health checks when we were able to do them. You have got time then to sit with that person and go through everything with them,” she says. “In the past I had a gentleman who I did advise nicely that he needed to go to the hospital. He really wasn’t well. I didn’t want to panic him, but I did need him to go because he was actually about to have a heart attack.”

In addition to taking the gentleman’s blood pressure, Theresa chatted with him and listened carefully to what he had to say. She learnt that he had his own business, which was proving very stressful and they both agreed that this extra stress was having an impact on his health. “I said to go get checked now, instead of being in a worse position further down the line,” Theresa explains.

The gentleman returned three days later to inform Theresa that he was heading into hospital for coronary artery bypass graft surgery. “When he had the bypass, he did send some beautiful flowers through. It is nice to know that you are actually making an impact on people’s lives,” says Theresa. And this is an aspect of her role that she loves – that and no two days being the same. “I enjoy the different challenges of who is going to be that next patient and what the challenges are going to be,” she explains.

Over the last year, Theresa has not been able to provide care in quite the same way due to the pandemic, but she has adapted her practice to let her customers know that support hasn’t gone away completely. “You can’t go to the consultation room and have that one-to-one that customers require,” Theresa explains. “For those that can’t get out, I go to them. I stand distanced from their door and just let them know we are still here; let them know they are not forgotten. They think nobody is bothered or cares, but we do care, and we are bothered.”

The use of PPE has made conversations trickier, too, and Theresa says that “there is nothing worse than trying to shout at [customers] through a mask”. She recalls one instance where an older woman came into the pharmacy looking for additional advice, but it was made difficult due to social distancing. “She didn’t want to say it in front of everybody and she didn’t want me shouting the information to her – I sensed that very quickly,” Theresa explains. “We went out to the corridor and I spoke to her. It was for female issues and I advised her on what she could get over the counter and what she could get from her doctors if she just rang them up. She was so grateful.”

Theresa always uses the knowledge she has gained over the years to best serve her customers, but it’s not just these individuals who benefit. “My main passion for anything you do in life is if you have knowledge, share it,” Theresa enthuses. To this end, she has hopes to become an area manager and use her knowledge to train and support new staff in the future. 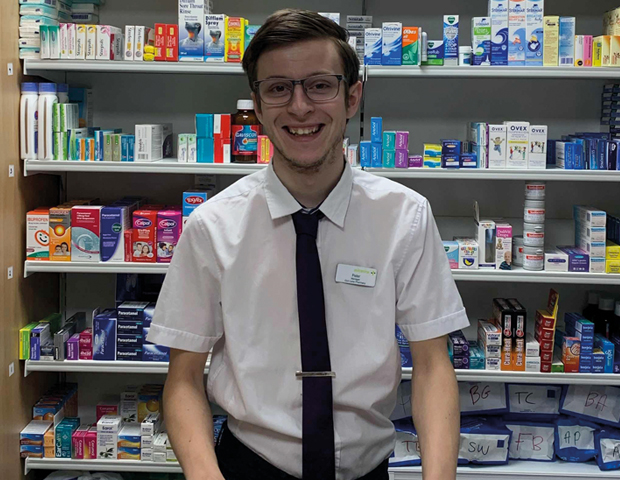