Covid-19 has undoubtedly taken its toll on many people’s mental and physical health and wellbeing, and pharmacy teams have a role to play in supporting people through the crisis

As lockdown gradually eases, it isn’t just people’s physical health that may need to be assessed and addressed. In May 2020, a survey by the Royal College of Psychiatrists revealed that 45 per cent of psychiatrists in the UK saw a fall in their most routine appointments following the Covid-19 lockdown, leading to fears of a “tsunami” of mental illness after the pandemic. 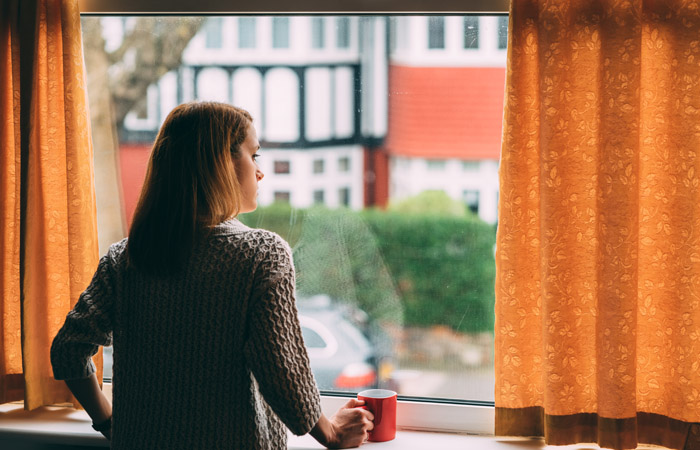 On 9 April 2020, the Office for National Statistics (ONS) published a bulletin entitled ‘Coronavirus and the social impacts on Great Britain’, following the implementation of lockdown measures. In this bulletin, 85.8 per cent of people said they were either very worried or somewhat worried that they or someone in their family would be infected by the coronavirus; this was higher for at-risk groups – 91.7 per cent of those aged 70 years and over and 90.4 per cent of those with underlying health conditions. Since then, weekly surveys have continued to reveal significant impacts on people’s mental health.

“With the current situation, there’s almost a global anxiety,” says Jon Manning, chairman and CEO of Arthur Ellis Mental Health Support. “Some of this stems from the fact that the situation has lasted for much longer than first thought and now people feel there is no definite end. It’s interfering with all different aspects of life and affects everyone – no matter their gender, age [or] ethnicity.”

The ONS data has revealed a gradual decrease in the nation’s anxiety levels since 9 April, but these still remain very high, especially in the at-risk groups. By 20 May and the release of the first bulletin after lockdown measures were slightly relaxed, 72 per cent of British adults said they were concerned about the effect that the coronavirus was having on their life, rising to 73 per cent of those aged 70 and over, and 82 per cent of those with an underlying health condition.

Being under lockdown has put immense strain on people’s mental health, with worries about household finances, the impact on wellbeing and what the future holds. By 23 April, people were becoming increasingly concerned about their inability to make plans.

Although it isn’t known how many of those whose wellbeing had reportedly been affected had pre-existing mental health issues, 23.9 per cent of these people said the pandemic was making their mental health worse. Two weeks later, 63 per cent of those affected said that they were feeling stressed or anxious and 53 per cent were feeling bored. Over four in 10 people also said that not being able to exercise as normal was impacting their wellbeing. On 20 May, the most common impact of Covid-19 on people’s lives was a lack of freedom and independence.

“We, as humans, are social beings, and spending time with others has a hugely positive impact on our wellbeing,” says Dr Elena Touroni, consultant psychologist and co-founder of My Online Therapy. “Without this, it’s natural that our mood, feelings and approach to everyday life can change. The current environment is challenging, not only because it’s constantly evolving, but also because coping with isolation is beyond anything we have ever had to deal with before.”

Anxiety UK reported an unprecedented rise in demand for its support services early on. Calls to the charity’s helpline increased by 364 per cent in the week ending 16 April, while visitors to its website and contact via other channels had also risen significantly.

Nicky Lidbetter, the charity’s CEO, says that two types of people are getting in touch. “Firstly, those with pre-existing anxiety conditions whose normal coping strategies may have been taken away and they may be finding it difficult to access support. Then there are those who are only starting to experience anxiety, which is more likely to be triggered at the moment due to the uncertainty. People who are anxious may worry that physical symptoms are part of Covid-19. [pharmacy teams] need to explain that anxiety isn’t all in the head and that adrenaline is causing symptoms of panic.” 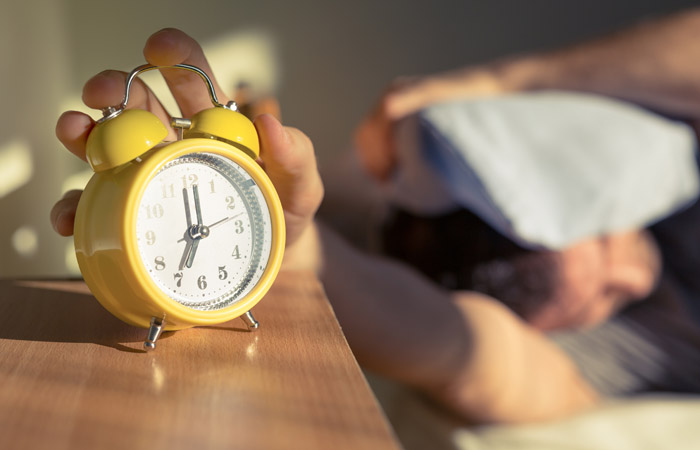 ONS data has revealed a gradual decrease in the nation’s anxiety levels since 9 April, but these still remain very high

The public needs to know the latest Government guidance on how to protect against Covid- 19 and any lockdown changes. The ONS weekly bulletins assessed whether people were happy with the information available to them. In the 9 April bulletin, 77.4 per cent of adults said they understood how to protect themselves, but only 47.8 per cent said they had enough information about the UK’s plan. By 23 April, both percentages had increased slightly to 82.5 per cent and 50.6 per cent respectively.

In the ONS Bulletins, TV or radio were the most popular sources of information, particularly for the over-70s. Official websites of the NHS and the Government also provided information to over six in 10 adults, being considered to be the most trusted and helpful websites. The under-70s, in particular, used social media as an information source.

PHE stresses that 24-hour news and constant social media updates can make some people more worried, so they may need to limit their exposure. Pharmacy customers might discuss some of the information with the pharmacy team. The graph below indicates the percentage of people who stated they were worried about infection.

“It’s important to stay informed about what’s happening in the community so that you can follow the advice and pass safe reliable information on to the public,” says Jon. “Remember, you’re not the expert in coronavirus. However, the public do look at you as a source of information that is going to be accurate.” 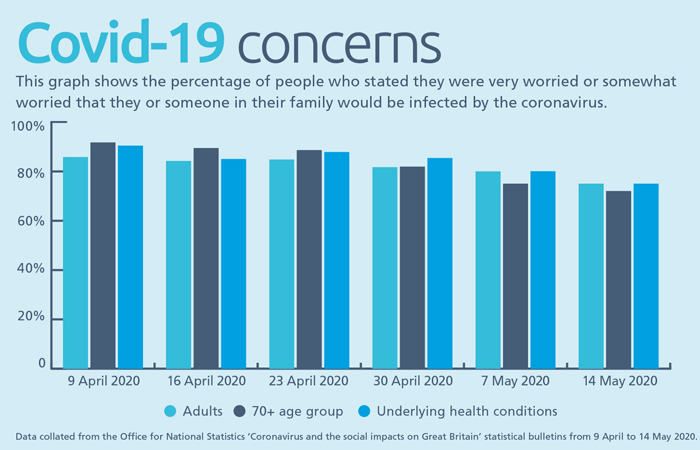 A study published in the British Medical Journal in May 2020 revealed that men are at an increased risk of developing more severe Covid-19 symptoms and also of dying from the disease. The team of UK researchers found that 60 per cent of patients admitted to UK hospitals with Covid-19 between 6 February and 19 April 2020 were male. According to the Men’s Health Forum (MHF), men are twice as likely to die from Covid-19 as women, and male doctors are 12 times more likely to die from Covid-19 than their female colleagues.

The exact reasons for this remain unclear, but research is looking into whether it may be a combination of biology, behaviour and attitudes. Female sex hormones, for example, are thought to strengthen the immune system, whereas testosterone is immunosuppressive. Men are more prone than women to chronic conditions such as high blood pressure, diabetes, heart disease and chronic lung conditions, which seem to increase the risk of Covid-19 complications. Smoking and alcohol have also been associated with more severe cases, both being more common in men than in women. Men may also be less likely to wash their hands, downplay the severity of the virus and delay seeking help.

The MHF recommends that male-targeted health information on Covid-19 should be available in healthcare settings, including community pharmacies.

Although GP surgeries remain accessible in most cases, some people may only see a healthcare professional face-to-face if they visit their local pharmacy. “If you notice a customer is stressed or anxious, you could consider reaching out to them and starting a conversation,” says Simon Blake, chief executive of Mental Health First Aid England. “We don’t often talk about our mental health so it might seem a little daunting, but it’s important to remember you don’t have to be an expert. Keep the conversation positive and supportive, ask open questions and take the customer to a quieter safe space where social distancing is possible if you sense they need further support.”

PHE and mental health charities have issued guidance about looking after mental health during the pandemic. This advice includes:

Nicky says that customers may need help with getting their anxiety levels down. “Advise them to avoid ‘what if’ catastrophising thoughts and concentrate on what’s happening now rather than what could happen in the future,” she says. “They can also do simple breathing exercises – mental health first aid – that pharmacies can describe. Medication is only one way of managing anxiety and it is important to stress the need for a holistic approach, including diet, exercise or complementary therapies such as meditation and talking therapies. All pharmacies should be aware of local and national support services so they can signpost customers to them.”

Geoff Heyes, head of health policy and influencing at mental health charity Mind, adds that it’s important for all healthcare workers, including the pharmacy team, to look after their own mental health as well. “All staff within the healthcare sector do a hugely difficult job, day in, day out, no matter their role,” he says. “This pressure has never been greater than during the last few months of unprecedented challenge. That’s why Mind, Samaritans, Shout and Hospice UK launched ‘Our Frontline’, round the clock one-to-one support, including a text service, online resources, toolkits and advice to support mental health and emotional wellbeing.”