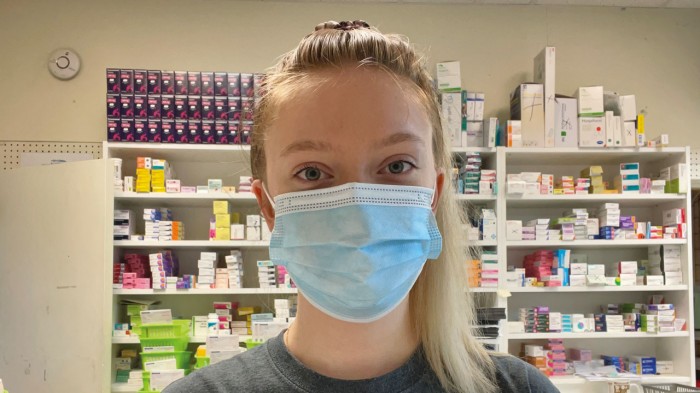 In the past few years, Louise Johnstone has put her all into her career in pharmacy.

After taking a pharmacy services course at college and completing various pharmacy placements, Louise Johnstone wasn’t sure she wanted to continue in the profession

“At that time, I was actually working in Burger King, so I thought right I’ll try one more pharmacy and I’m so glad I did because I ended up at Right Medicine Pharmacy, which is where I am currently.”

Although happy with her decision to stick with the profession, her first three years in pharmacy have been a whirlwind since she started in July 2019.

"My original contract was 18 hours, but when Covid hit, the full-time lady was pregnant, so she had to isolate, as did my pharmacy manager who was vulnerable," she explains. "I took on the full-time position, so I was basically thrown into it, and I just had to get on and do everything I had to do!

"Since Covid, our prescriptions have gone through the roof – we’re very, very busy. I think because everybody was trying to keep to their own area, I think a lot of people had taken their prescriptions to other pharmacies but now they’ve all just stayed! The surgery has taken on another 4,500 patients, because there’s a lot of new houses so we are getting evermore busier."

Such an intense introduction to her career meant she was keener than ever to get through her training as quickly as possible. Her hard work has paid off as after less than three years, Louise has completed her pharmacy technician course and is now into her accuracy checking training. "I’m really enjoying the course at the moment,” she says. “It kind of puts a different element on my work, which is great because – although it’s not a break – it kind of feels like it is because you’re only focused on doing one thing."

Asides from training, Louise’s days are taken up with her day-to-day work in the pharmacy. She handles prescriptions, collects them from the surgery and also does dosette deliveries. "I preview all the prescriptions, anything that’s not ready to be collected, like CDs," she adds. "I do some dispensing and I help with any queries from our sister store on Forest Road in Edinburgh, if they have any queries, I’ll help and I’ll place any special orders."

"I’ve also been promoted to pharmacy supervisor within the last couple of weeks because of all the things that I do for the pharmacist manager, so I now do all the paperwork which is another element to add in which I enjoy. I like keeping busy!"

As the pharmacy has emerged from the pandemic, Louise has also been instrumental in reintroducing serial prescriptions. "I tried to register lots of people for the serial prescriptions sign up, and I sent that over to the surgery so patients who were eligible could be added as soon as possible," she says.

"I’ve been involved in video calls in Midlothian regarding serial prescription queries as part of the new Medicine Care Review, which used to be the Chronic Medication Service (CMS). It’s really important with serial prescriptions to ask the customer what they need and remind them of the way to use it, which is quite difficult for the counter assistants to remember. I now put a little sticker on the front of the prescription to alert them to ask – it’s proved to be quite a good system."

Amid all her responsibilities, Louise still makes time for her individual customers and goes above and beyond for them where she can. An example of this is one customer who comes into the pharmacy frequently for medication. "Her son suffers from learning difficulties but he’s in his late thirties and a lot of his medication has to be fairly specific," explains Louise. "For example, he can’t take his paracetamol if it’s coloured."

She adds: "Trying to source Calpol that isn’t coloured can be quite difficult within the drug tariff range, I had quite a lot of problems trying to get that and he’s also epileptic, so with that medication as well, it either has to be a certain flavour or a certain colour. Phoning up loads of different buyers to try and find it is usually quite difficult."

"We have now got quite a regular stream from a certain company, so it has actually worked out quite well. She is always really thankful, and if there are any problems, she always asks for me, and I always help. She’s a really, really nice woman. I’m in awe of how well she manages everything. It’s really nice to do my part to make things easier."

It’s this act of helping people that is Louise’s favourite part of her job. "It’s the satisfaction of helping people who are ill," she explains. "I know that’s probably obvious, but to see the improvement over time, mainly with methadone and substance abuse patients, it is so satisfying. We have one patient who was on 100ml and he’s now down to 30ml. He has managed to reduce by 5ml a week and he has just done absolutely amazing, I’m so proud. To see someone get to where they want to be is the best feeling."