When Woolworths called in the administrators, threatening Pam Conway’s job, she applied for a role at the Co-op Pharmacy in Manchester’s Northenden, excited for a new challenge. It’s fair to say that having to work with a vending machine that dispenses prescriptions probably wasn’t what she imagined the future held, but almost 10 years on, that’s her high-tech reality and she’s loving every minute. 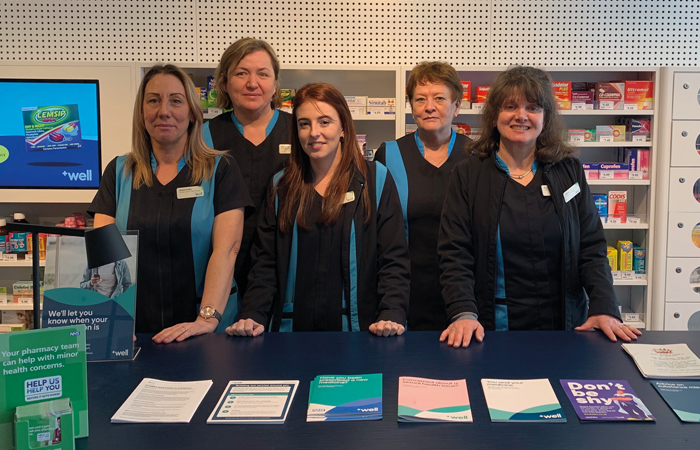 Now Well’s flagship ‘Essential Pharmacy’ store, Northenden is at the cutting edge of pharmacy innovation, focusing on what matters most to customers: a fast, simple and efficient healthcare service.

After asking over 4,000 customers with a recent prescription what they wanted from their ideal pharmacy, renovations began in July 2018 to create a pharmacy based on patient need.

Months of hard work in keeping the pharmacy running smoothly and maintaining a high standard of customer service despite the disruption culminated in a grand opening on 5 November, making it a date to remember for multiple reasons. The whole community came together, with Mike Kane, MP for Wythenshawe and Sale East, cutting the ribbon and officially opening the new store.

Rolling with the times

The new pharmacy has been designed to make it easier for customers to see where to go for healthcare advice, buy over-the-counter medication, or collect prescriptions. Pam (second right) explains that the pharmacy’s interior “sort of looks like the Apple store”, with a big counter that aids staff in having effective, informal consultations. Pam explains: “The desk is good for us to sort out any sort of queries, especially as it’s separate from the till.”

The dispensary has also been completely re-designed to allow the pharmacy team to work more efficiently. Taking up just 15 per cent of the overall floor space in its old configuration and hidden away in the back corner of the store, the dispensary now takes up half of the store and has a very open feel. Pam explains this has sparked interest from the locals. “People like the style of the shop. The front has all changed so you can see into the dispensary and we get customers knocking on the window – it’s quite nice.”

Pam explains that the upgraded dispensary, with individual workstations and new workflow systems, has “improved prescription flow and how we manage prescriptions” and “made us much busier patient-wise. It’s definitely benefitted the pharmacy”.

Having completed her dispensing assistant training eight years ago, Pam spends at least three days a week in the dispensary, largely focusing on making up blister packs, but she says everything is a team effort and she’s equally happy on the shop floor helping customers.

“There’s the pharmacist and then four of us in the dispensary and two at the counter in the shop. We all work very well together; it’s a nice team to work with,” Pam explains. “I look after the walk-ins, prescriptions, take care of deliveries and collections and FRPS (free repeat prescription service). We also take blood pressure and advise on minor ailments at the counter.”

As the store is the first of its type, there is an element of trial and error with establishing new systems and getting to grips with the new technology, but this is a challenge that Pam and the team are embracing.

Well Northenden’s pride and joy is their new dispensary vending machine. With access from the street, the vending machine enables certain patients 24/7 access to their prescriptions, and Pam is one of the driving forces behind it, spending time loading in the prescriptions and discussing the concept with curious customers.

“It’s like a hole in the wall cash machine,” says Pam. “We load the vending machine and then the patient gets a text with a unique pin. People are very interested in it; it’s very convenient for when people are working and can’t get into the pharmacy, or on the weekend.”

Beyond this, Pam says it’s definitely benefitted how the team works as it enables them to get through more prescriptions and work more efficiently, and frees up time to spend supporting customers. It also has the added bonus of being unique to the area, Pam states: “As far as I’m aware it’s the only vending machine dispensary in Manchester.”

Spurred on by the renovations and innovations, the team at Northenden are always looking to improve, especially when it comes to dispensing, and Pam and the team’s next task is to work out how they can further optimise the vending machine.

All the team members are on board with the changes, having attended meetings and training sessions at each stage of the process. Pam says that being kept in the loop has made it feel like a real collaborative effort.

With the structural changes now complete and pharmacy life returning to normal, all that’s left is to fine-tune the new systems and maintain the standard of customer care that has been achieved with the upgrades. Pam concludes that their main goal is to “keep doing what we’re doing and battling on.”

The changes have made us much busier patient-wise