Despite having only worked in pharmacy for a short while, Jacqueline Douglas has had a tremendous impact on her pharmacy, customers, patients and community, so much so that she was named winner of the Rising Star Award in a near-unanimous decision from the judges

Before joining the Forfar branch of Boots, Jacqueline was a local registrar of births, deaths and marriages. It was a job she enjoyed, but she had become as qualified as she could be, so felt it was time for a change. Contemplating what to do next, Jacqueline realised that what she enjoyed most as a registrar was dealing with people. “I also have always had an interest in the human body, science and learning,” she says. “So when this job came up, I went for it and was delighted when I got it.” 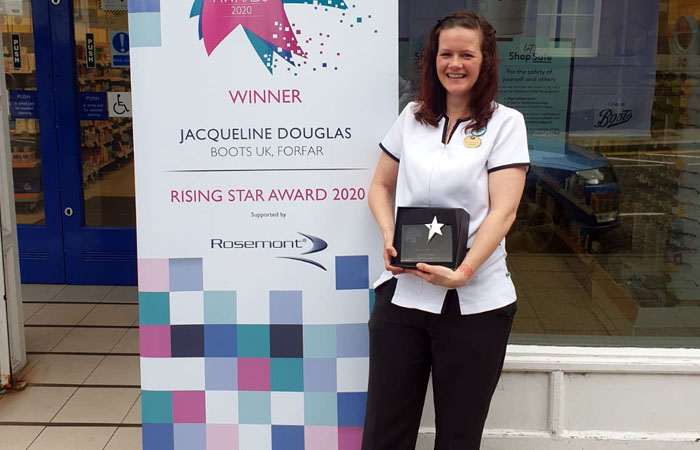 A clear path of progression up the pharmacy ranks really appealed to Jacqueline. “I want to go as far as I can,” she explains. “I love putting my learning into practice in the store with the customers.” Already having completed the Boots pharmacy advisor course, she has her sights set on working her way up to accuracy checking pharmacy technician.

As part of her current responsibilities, Jacqueline looks after several patients on the pharmacy’s smoking cessation service. She finds this particularly rewarding, as all of her patients are doing well, but one customer in particular stands out. In his late 50s, he enrolled on the programme concerned because he was smoking 40 cigarettes a day and was waiting for a COPD diagnosis. “He was aware that he was really damaging himself and needed to give up,” says Jacqueline.

After an inital consultation, discussing his usual smoking routine, she was able to suggest several strategies for him to transition from cigarettes to an inhalator device and eventually to a mug of tea. This worked and by week eight he was feeling so much better that he had managed to run for a bus without getting out of breath. He was also able to treat his wife with the money he had saved from not buying cigarettes. “I have loved sharing this journey with him,” says Jacqueline. “The difference in this man is amazing.”

Setting up a safe space

It’s not just her direct service users who are benefitting from Jacqueline’s decision to enter the world of pharmacy, however. When she has ideas that could have a wider reach than just her pharmacy and home town, she ensures she takes the steps to make it happen. “We had a young woman come into store who was on her phone to someone, saying she felt terrified and shouldn’t have left the house. She was crying and we could hear her distress,” she explains.

One of Jacqueline’s colleagues chatted to the young woman, offering as much support as they could. Later that day, Jacqueline couldn’t stop thinking about the situation. “I privately messaged Boots head office asking if Boots could be promoted as a safe place for anyone who needed it,” she says. “I got a reply from the assistant manager of corporate social responsibility who thought it was a great idea and said she would put it forward.”

An asset to the company

In nominating Jacqueline for the Rising Star Award, store manager Sharon McKenzie said: “No matter what I ask of Jacqueline, nothing is too much and she is always eager to learn and develop herself further… I am grateful every day that I have a colleague as hard working and caring as Jacqueline.”

The judges were hugely impressed too. APTUK president Liz Fidler highlights Jacqueline’s passion, use of transferable skills, patient care and application of knowledge, “which feels underpinned by a wealth of experience not usually found in the first two years of practice”. Ade Williams, superintendent pharmacist at M J Williams Pharmacy, says: “Jacqueline’s passion, dedication and pride stands out. We must find a way to bottle that effusive personality and share it.”

Upon receiving her award Jacqueline said...

"I never expected anything like this to happen to me and being nominated for the award was an incredible feeling, but to win it was something else entirely. It feels unbelievable, and makes me so happy. It truly cements my feeling that this is the right path".