Pharmacy Champion winner Karen Sirrell is a true inspiration, not just through how she has raised the profile of her pharmacy within the local community, but also because of her amazing energy and determination to overcome personal obstacles

Karen has worked in community pharmacies for 30 years as a dispensing assistant and, for the last three years, as an assistant manager. “I love my job and even when I am not on the rota to be in my pharmacy, I go and help out in the nearby pharmacy on Saturdays and Sundays,” she says. “I take the pressure off the pharmacist by running the dispensary and making sure all the jobs are kept on top of. I get all the scripts ready, print off the EPS, run the dosette boxes and I am always on the lookout for NMS patients.” 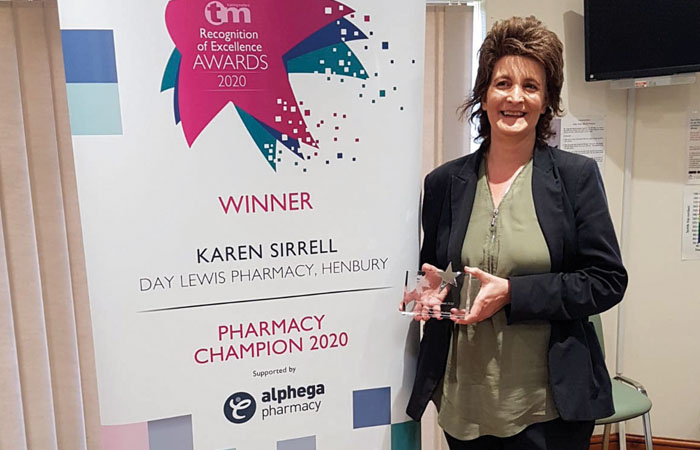 Achieving all of this and more on a daily basis at Day Lewis Pharmacy in Henbury, Bristol has been more challenging in recent months, and not just because of Covid-19. “This past year has been my most difficult,” explains Karen. “During 2019, I was diagnosed with cancer.”

However, Karen was determined to not let the diagnosis rule her life and decided instead to focus on the things she knew and loved. “During my treatment, I had six months of chemo and an operation,” she says. “I always had my chemo on a Friday so I could be back into work on the Monday, and my month of daily radiotherapy was booked for 6.30pm, after I had finished for the day. There were some days when it was really hard to get up in the morning, but the rest of the team and Day Lewis were fantastic and really looked after me.”

Thankfully, Karen is winning the battle against cancer. “I still get tired and every day is a new challenge,” she says, “but I am getting back to my old self.”

This “old self” is someone who always puts her patients first. “Every day is different, working in a deprived area in Bristol,” says Karen. “I will often call in to see people who are unwell on my way to work or on my way home.”

She also phones or goes round to check on people she hasn’t seen or heard from for a while, just to make sure they are OK. “My patients are really grateful for this and I have received a number of thank you cards from people where I have made a difference,” explains Karen. “It’s normal for me to do this and I don’t think of it as being anything special, but my colleagues have said that I am a ‘true inspiration’ and ‘full of energy’. I just see it as taking time to care for people in a way that people care for me.”

One recent example, which stood out for the judges, was of a patient with learning difficulties who came to the pharmacy saying he wanted to end his life. “I talked him into coming with me to the doctors and I waited with him until he was seen,” says Karen. “He still pops in to see me now, just to let me know he’s okay.”

Karen’s determination to promote her pharmacy and raise its profile among the local community, as well as with local doctors, also impressed the judges, which is why she was named Pharmacy Champion. Day Lewis head of pharmacy Tim Rendell said her efforts showed “true dedication in pushing pharmacy forward”.

The pharmacy is situated within a GP surgery, where the team works closely with the doctors, although it hasn’t always been this way. “I have worked tirelessly with my team to make this happen,” says Karen. “It has taken a number of years to build up a relationship built on mutual trust and respect, and that has come from showing them how we can help them.”

A true believer in the power of communication, Karen says that the key to developing such a close working relationship was spending time talking to the GP team, initiated by simple gestures such as making tea for everyone. “Lots of problems can be sorted out over a tea break,” she explains, “and my pharmacy now benefits from this close collaboration.”

Upon receiving her award Karen said...

"Oh gosh, I was just really surprised and it came as a big shock really. I still can’t believe it to be quite honest".