It was impossible for the judges to ignore the unprecedented amount of positive feedback Ammar receives from his customers on a daily basis. Known as the ‘boy on the counter’, it’s our pleasure to share with you the winner of the Customer Care Award

After gaining little from school and leaving college before finishing his exams, Ammar started working at his uncle’s pharmacy whilst he figured out what to do next. “It turns out I loved it there so much, so I got qualified and worked there for about five years,” he says. “By the time I was 18, I was running the counter and I was able to provide for my parents, which was a really good feeling.”

After having to leave pharmacy for a little while due to having multiple operations, he returned and since then things have just gone up and up for Ammar. “Whilst I was recovering, I did the odd shift at GP surgeries, and I think they recognised that I was really good at what I do. I got a job offer from a friend to work in a pharmacy who then put me forward to be a manager and it’s just gone from there really. Everything has started going well for me, I even got married recently.” 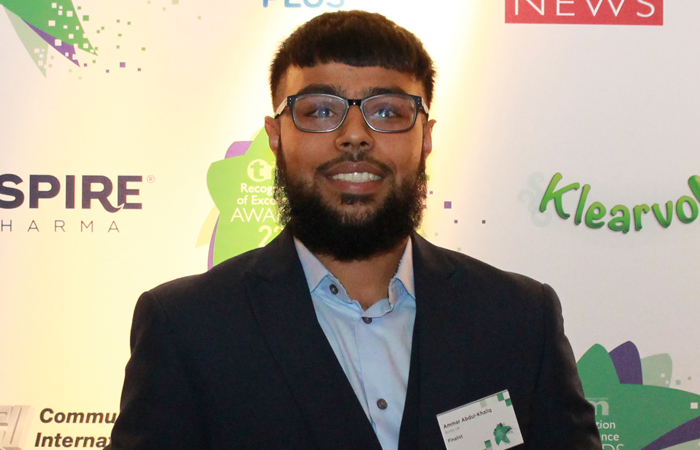 Now he has been working at Boots UK in Flackwell Heath for eight months and has become well known and loved by his customers and his team. “I am the ‘boy on the counter’ which I really like. My team gets fed up with me a lot! They say I am too energetic; I am their coffee in the morning. I try to make sure we have a team chat at the start of the day, we really, really care about each other, which is a great environment to work in.”

As a team they aim to ensure everyone receives weekly training, covering for each other when necessary. “We’re like a family, nobody is bigger than each other. That’s what community pharmacy does I think, it gives you a whole new family, colleagues and customers.” Currently, the focus of their training is on depression. “Safeguarding is also one of my biggest things, I think a community pharmacy should be a place where you can come in and see friendly faces, but also know that anything you say won’t go any further,” he explains.

When we spoke to him just before the awards ceremony, Ammar said: “I’m stoked, really excited – it’s nice to be recognised for stuff that you’d do anyway for anybody!”

Ammar demonstrated his willingness to help when a customer had an embarrassing accident in the store. “He was very quick to assess the situation and responded in a very empathetic manner reducing embarrassment for the customer,” explains pharmacy advisor Rabiah Yasmin, who nominated him for the award. “He took the lead in calming the customer down, reassuring her and allowing her to use the facilities in the store. He also went out of his way to purchase items of clothing so she could comfortably return home without further embarrassment.

“Other customers who were in the store at the time of the incident also noticed how well Ammar responded and wrote reviews online in our customer feedback.”

But it doesn’t stop there. “Ammar in particular did not hesitate in any way nor shy away from taking lead in cleaning the store,” says Rabiah. This prevented the store from having to close, instead, customers were able to be redirected to the pharmacy’s backdoor and the team could continue to provide essential services. “Ammar is not the type of person to sit around or take a back seat. He is always eager to help in any way, whether that is with customers or colleagues. He is a credit to our team,” adds Rabiah.

This resonated with the judges. Ammar showed: “An example of compassion and empathy managed in a professional way. Supporting patients and making a difference,” according to Liz Fidler, senior professional advisor pharmacy technician practice at NHS England and Improvement. “Demonstrating that pharmacy is a healthcare professional able to apply training in all situations and always putting patients first.”