Baby care: into the unknown

Baby care: into the unknown

Caring for a baby can be as stressful as it is joyful, especially when it comes to their health. Pharmacy teams can be on hand to offer support and advice for a wide range of conditions, including ones that parents may be less familiar with, to help them feel prepared

When it comes to caring for babies, there are some conditions that get discussed regularly: colic, constipation, nappy rash and teething, to name a few. But while understanding how to manage these is central for keeping parents happy and babies comfortable, there are some conditions that are generally discussed to a lesser extent, but are arguably just as, if not more, important to be aware of and understand.

Pharmacy teams can be on hand to offer parents measured advice and information on a multitude of conditions that affect babies – how to identify them, the dos and don’ts of management, ways to treat them where possible, and in some cases how to help to prevent them.

A common viral infection of the airways in children between the ages of six months and three years, croup is characterised by a barking cough that sounds like a seal, hoarseness, difficulty breathing and a rasping sound when breathing in. These symptoms are often worse at night. Often cold-like symptoms such as a temperature, runny nose and a cough appear initially, followed by croup symptoms a few days later.

Croup is usually mild and gets better on its own within 48 hours, however parents should be advised to ring NHS 111 if the condition is suspected, as treatment and/or observation may be needed.

Note that children with croup who have difficulty with breathing should be referred directly to hospital.

Also known as slapped cheek syndrome or parvovirus B19, fifth disease is a virus that commonly affects children. It is not usually serious and should clear up on its own in around three weeks.

Children will often feel unwell for a few days with symptoms such as a high temperature of 38°C or more, a runny nose, sore throat and a headache. A bright red rash may appear on both cheeks, looking as though the cheeks have been slapped – hence the name. A few days later, a lighter-coloured rash may appear on the body, which can be itchy. These rashes usually fade within two weeks. Individuals are no longer contagious once the rashes develop. While there is no vaccine or treatment, frequent hand washing can help to reduce the risk of passing on the infection.

A highly contagious skin condition, impetigo is common in children and is not usually serious, although it typically requires treatment. The infection is characterised by red sores or blisters, often on the face and hands, which burst and leave crusty, golden-brown patches that can look like cornflakes. These patches can be itchy and painful, get bigger and spread to other parts of the body.

A type of streptococcal bacteria, Group B strep – also known as strep B – is commonly found in the body and is usually harmless. However, in rare cases, it can cause serious infections in babies including sepsis, pneumonia and meningitis. Early diagnosis is essential. Yet according to the charity Group B Strep Support, many pregnant women feel inadequately informed about the illness, demonstrating the need to pass on vital information.

If pregnant women have group B strep during pregnancy, their baby will usually be healthy, however there’s an extremely small chance of miscarriage and a small risk that it could spread to the baby during labour and make them very ill. On average, two babies a day develop the infection, with one a week dying and one a week being left with a life-changing disability.

Two-thirds of babies who develop group B strep become unwell during the first six days of life, and usually within the first 12 hours after birth, which is known as early-onset. Symptoms usually present as sepsis with pneumonia and include:

Late-onset group B strep infection is less common. It can affect babies between seven days and three months of age, and the symptoms are similar to those for early-onset of infection.

There are no known ways to prevent group B strep infection after a baby is born so knowing the signs and accessing early and aggressive treatment is key.

Meningitis is an extremely serious condition where the tissues around the brain and spinal cord become inflamed as a result of a bacterial or viral infection. It can affect anyone but is most common in babies and children under five, as well as teenagers.

The bacterial infection that causes meningitis also commonly causes the blood infection sepsis and the symptoms are similar. They can appear in any order and develop suddenly, although not all of them may be experienced:

Note that the rash that many people know to be characteristic of meningitis does not always appear. As meningitis and sepsis are medical emergencies, people should be advised to trust their instincts and get urgent medical attention without waiting for a rash to develop. 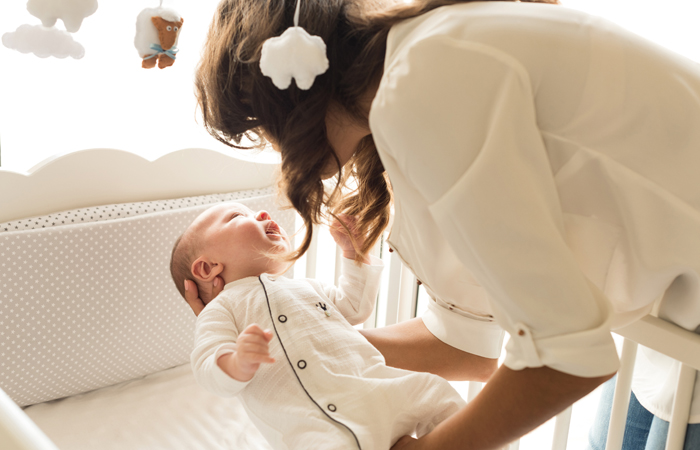 The unexplained infant mortality rate has shown a statistically significant decline since records began in 2004, but this has levelled out since 2014, which the charity says is “not good enough”. The latest figures from the Office for National Statistics (ONS) show that there were 0.30 deaths per 1,000 live births in 2018, compared to 0.28 deaths per 1,000 live births in 2017. While the ONS warns that caution is needed when comparing year-on-year changes in rates due to the small numbers of unexplained infant deaths recorded each year, The Lullaby Trust has expressed its concern and highlights the potential for the Covid-19 pandemic to cause a further rise in the number of sudden infant deaths.

“SIDS rates are highest in the most deprived areas. We are concerned that the increased pressure placed on public health services by Covid-19 meaning less support for new parents, combined with rising poverty, could lead to a further increase in the number of deaths,” says Jenny Ward, CEO of The Lullaby Trust. “Only by making all families aware of how they can reduce the risk of SIDS and support them to help protect their babies can we ensure we do not see more lives lost.”

Sudden infant death syndrome (SIDS) – sometimes known as cot death – is the sudden and unexplained death of an apparently healthy infant where no cause is found after a detailed post-mortem. Around 88 per cent of SIDS deaths occur in babies aged six months or under.

The cause of SIDS is unknown, but it is likely to be a combination of factors that make an infant more vulnerable to stresses at a certain stage of their development. There is currently no evidence to suggest that any babies who have died from SIDS have any previous symptoms. Babies who are born prematurely or of low birthweight are at a higher risk of SIDS, and over half of cases (57.6 per cent in 2018) are boys.

According to a survey by The Lullaby Trust in 2020, almost half of parents surveyed (46 per cent) admitted to taking actions which could greatly increase the risk of SIDS. These included unsafe co-sleeping, such as a parent co-sleeping with their baby on their chest or on a sofa or armchair. An adult sleeping on a sofa or armchair with a baby increases the risk of SIDS by up to 50 times.

In addition, putting the baby on their back for every sleep is one of the most protective actions that can be taken to reduce the risk of SIDS, although a third of parents surveyed admitted to putting their baby on their front or side. A positive development, however, is that since The Lullaby Trust’s ‘Back to Sleep’ campaign was launched in 1991 to help encourage parents to lay their babies on their back to sleep, the rates of SIDS deaths has dropped by 82 per cent.

The Lullaby Trust has a huge range of resources for parents and carers, as well as healthcare professionals, to help encourage safer sleep at. The charity also has these quick tips: