With smoking rates continuing to decline, the outlook is positive, but there’s still work to be done to protect the nation’s health

The number of people who smoke in the UK is continuing to decline, as it has been since 2011, falling from 14.7 per cent of the population in 2018 to 14.1 per cent in 2019, according to the latest ‘Adult smoking habits in the UK’ report from the Office for National Statistics (ONS). 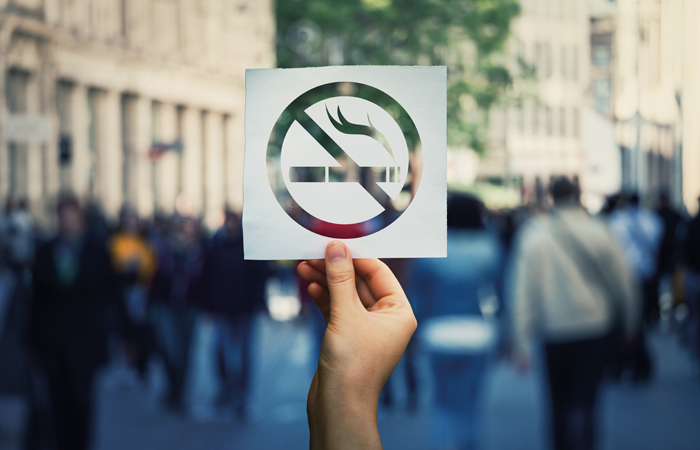 In addition, recent figures from NHS Digital reveal that the number of smoking cessation prescription items dispensed in England has dropped by more than 1.5 million over the last decade: fewer people smoking means fewer prescriptions are necessary.

With the negative impact of smoking on health well known, not to mention extensive, these statistics are welcome news, but there is still a long way to go before the UK is smokefree, which the Government plans to achieve by 2030. Events such as the ban on smoking in enclosed public places in 2007 and, more recently the switch to plain cigarette packaging featuring stark health warnings, a ban on all tobacco promotion and criminalising smoking in cars carrying young children, have all played their part in reducing smoking rates, alongside anti-smoking campaigns and providing smokers with support to quit via the NHS.

What’s more, an unexpected positive outcome of the Covid-19 pandemic is that between March and July 2020, over a million people in the UK stopped smoking as a direct result of the pandemic and a further 440,000 smokers made quit attempts. Smokers hospitalised with Covid-19 are more likely to suffer severe outcomes than non-smokers, and smoking-related illnesses including COPD, diabetes, stroke and other heart conditions have also been linked to worse outcomes from Covid-19.

Joseph Carter, head of Asthma UK and British Lung Foundation Northern Ireland, says: “With the coronavirus pandemic continuing to affect our daily lives, there has never been a better time to quit smoking. We know the transformative affect it can have on people’s lives, so we need to ensure the support is there to help them kick the habit for good.”

Between March and July 2020, over a million people in the UK stopped smoking as a direct result of the pandemic

Get to know the facts

Speaking as part of a stop smoking campaign run by the charity Action on Smoking and Health (ASH) in 2020, Lee from Castleford, West Yorkshire, who had smoked since he was 18, said: “With the present climate and coronavirus, I’m so glad I have quit. My niece, who I am close to, was the person who motivated me – she said how much better I’d feel if I stopped smoking. I was sick of waking up coughing and spluttering – so
I made myself give quitting a go. Once the patches went on, that was it. My advice to people is to get to know the facts. If you put your mind to it, you can stop. You’ve got to be determined, but it does get easier.”

It’s a common assumption among smokers that if they have smoked for several years, or in some cases their entire adult life, there is no point in quitting. This isn’t true. Stopping smoking is the most important thing a person can do for their own health and the health of those around them – and it’s never too late.

Smokers who successfully make it one week without smoking are nine times as likely to successfully quit, and the chances of quitting smoking for good increase with every quit attempt. When people can understand the benefits of quitting, it helps motivate them and gives them a goal to aim for, and this is where information, advice and support from community pharmacy comes in.

Tobacco smoke contains over 7,000 chemical compounds, many of which are regarded as toxic and/or carcinogenic. Some of the key ones include:

Although there are many compelling reasons to stop smoking, including health and financial benefits, it is not easy to stop. Physical dependence on nicotine is a huge challenge. Over time, the body adapts to the presence of nicotine so customers trying to quit may experience withdrawal symptoms such as restlessness, increased appetite, inability to concentrate, irritability, dizziness, constipation and nicotine craving. These withdrawal symptoms tend to peak at about 24 hours and gradually ease over two to four weeks after quitting. Nicotine replacement therapy such as patches, gum, inhalers and sprays are the first-line measures to help manage this withdrawal period, as going cold turkey is not easy, successful or commonly advised.

Behavioural dependence, such as the pattern of smoking at certain times of day, in certain situations or as a way to help manage stress or other feelings and emotions, also needs to be addressed when helping customers quit smoking. This can be particularly challenging to tackle, as it can involve heavily ingrained behaviours. However, with the right support, as well as perseverance on the part of the individual wanting to quit, these behaviours can be altered and replaced with healthier alternatives to smoking.

All about the benefits

The positive impact of quitting smoking can be felt by individuals almost instantly after their final cigarette, with some signs such as the heart rate and blood pressure returning to normal in as little as 20 minutes.

Over the next days, weeks and months, blood oxygen levels increase, helping to boost energy levels and nourish oxygen-starved tissues and blood vessels; senses of taste and smell start to improve; breathing becomes easier as the bronchial tubes relax and lung capacity increases; and circulation improves, as do coughs and wheezing.

As well as these important health reasons for stopping smoking, there are many other benefits of giving up that can be highlighted when customers are seeking advice about quitting. These include:

Community pharmacies are well placed to play a significant role in helping smokers kick their habit and reduce the harmful effects of smoking on their health, which in turn helps reduce the burden on the NHS due to limiting smoking-related illnesses.

Samantha Gillatt is a trained stop smoking advisor and dispensing assistant at Langold Pharmacy in Worksop, Nottinghamshire. A finalist at the Recognition of Excellence Awards in 2020, Samantha has a great track record of helping people stop smoking, with 20 successful quitters under her watch in 2019. Developing and promoting a successful stop smoking service involves some careful planning and commitment, but Samantha has this advice:

After local GP surgeries refused to display posters for the stop smoking service that Samantha was running at the pharmacy, she decided to use Facebook to promote the service. This has proved very successful, having recruited many quitters via this route, as well as by displaying posters in the pharmacy window. Speaking about social media in particular, Samantha says: “It’s a great way to promote not only smoking services but other new products and services in the pharmacy.”

Listening carefully to the customer’s concerns about quitting and offering them a manageable action plan that fits around their lifestyle is vital to helping them quit. Samantha explains that she approaches “customers in a calm, gentle manner to assure them that I am there to work with them and not to judge them”. She adds that often customers come in feeling that they are going to be told off for smoking, but of course that’s not the case. “It is important not to overload the customer with too much information at the first consultation and focus on creating a good rapport with them,” Samantha explains. “This helps them put their trust in you, so they feel confident enough to give up their comfort blanket of smoking.”

Offer reassurance and advice on NRT

Pharmacy teams should offer customers good support alongside information about NRT products. “It’s important to give lots of encouragement and positive feedback,” says Samantha. “Invite them to come back each week for a chat about their progress and to help them keep motivated.”

Some customers may quit straight away, rather than gradually reducing the number of cigarettes that they smoke. However, using nicotine replacement therapy (NRT), gives customers a much better chance of being successful than using willpower alone. Pharmacy teams therefore need to have a good understanding of the products available, so they can advise customers on the most suitable one, depending on their smoking habits and preferences. Samantha says she often recommends patches as the first-line product to try alongside a second NRT product such as a spray or inhalator to help with cravings or for smokers who miss the hand hand-to-mouth action of smoking.

Samantha suggests agreeing small goals for cutting down on cigarettes if a customer is not ready to fully quit smoking. “Engaging customers to cut down the number of cigarettes they smoke gradually is a move in the right direction that should be positively acknowledged as this will help them on their journey to quitting for good,” Samantha suggests.