Are emerging diet trends encouraging a new way of maintaining a balanced diet? Find out how pharmacy teams can play an important role in vitamin guidance

Over the past five years, sales of vitamins, minerals and supplements (VMS) have risen by six per cent and this is estimated to continue, with the market forecast to grow a further eight per cent by 2023, according to statistics published by Mintel.

In 2018, 59 per cent of people in the UK took VMS, with only a quarter (26 per cent) of the population having never taken any form of supplement. It is estimated that around one in three people (34 per cent) take VMS daily and women are thought to take VMS at a considerably higher rate than men – 38 per cent compared to 29 per cent. So what’s top of the VMS pops? 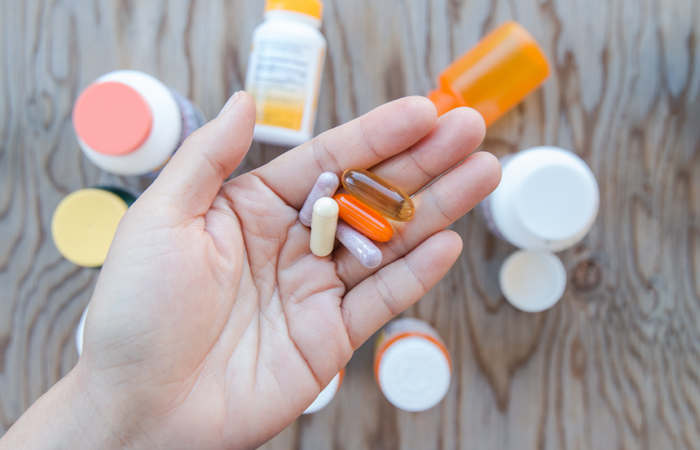 When it comes to vitamins, vitamin D overtook vitamin C to become Britain’s most popular single vitamin supplement in 2018. It is estimated that 33 per cent of VMS users take vitamin D, up from 26 per cent in 2017. While vitamin D usage has increased all age groups, it is 35-54-year-olds who are the main drivers, with usage rising from 22 per cent in 2017 to 35 per cent in 2018 among this group.

Mintel reports that there has also been a significantly strong growth in the sales of calcium and iron supplements. In the last year, calcium usage has increased from 20 per cent in 2017 to 29 per cent in 2018, and iron is up six per cent from 22 to 28 per cent. The biggest increase for calcium was seen among 25-34-year-olds, up from 25 per cent to 39 per cent, while for iron, it is 35-44 year olds who have upped their intake the most, from 22 per cent to 36 per cent.

It is thought that one reason for this increase in calcium and iron supplement usage is due to a rise in popularity of so-called flexitarian diets.

There has been a significant increase in the popularity of flexitarian diets – also known as casual vegetarianism – in the UK over the last few years. Nutritionist Emma Derbyshire defines a flexitarian diet as “one that is primarily vegetarian with the occasional inclusion of meat or fish”. Such diets include periods of reducing meat, dairy and sometimes other ingredients, such as gluten, and are often promoted as a way to aid weight loss and reduce people’s risk of heart disease, cancer and type 2 diabetes.

A study from the British Social Attitudes Survey by social research institute NatCen found that 29 per cent of people in Britain have reduced the amount of meat that they eat in the past 12 months.

Although there are fears such diets may not ensure a balance of vitamins and minerals, the bigger concern is for those who shift straight into a plant-based diet, eliminating meat entirely without considering the wider health impact. Emma says: “Diets should be carefully considered to ensure there is a balance of certain vitamins and minerals like B12, iron and essential fatty acids.”

This is not to say these diets cannot achieve a healthy balance. In a 2017 Swiss study published in the European Journal of Nutrition, omnivores – those who eat both meat and plants – reportedly had the lowest intake of magnesium, vitamin C, vitamin E, niacin and folic acid. Vegans reported low intakes of calcium and a marginal consumption of the vitamins D and B12. Despite substantial differences in intake and deficiency between groups, the results indicated that by consuming a well-balanced diet, including supplements or fortified products to bridge any nutrient gaps, a healthy diet could be achieved by both groups.

The rise in open attitudes towards flexitarian diets appears to correspond with an increasing popularity in using dietary supplements. Anita Winther, research analyst at Mintel, comments: “With as many as half of meat eaters believing their red meat intake should be limited, it is likely that people are looking to supplements to fill the iron gap left if they are reducing the amount of red meat they eat.”

Emma agrees and says that the shift towards “diets such as vegetarian and veganism will continue to create further change in the uptake of supplements”.

There is no doubt that the rise in flexitarian diets offers opportunity for sales of calcium, and iron supplements, as well as others such as zinc. Pharmacy teams can provide vital support to those who want to adapt their diet and lifestyle, ensuring they have the knowledge to enable them to maintain a healthy, balanced diet.

These diets should not be considered dangerous or unhealthy, but should be closely monitored to ensure that the intake of certain vitamins and minerals do not drop to unhealthy and potentially dangerous levels.

In the UK the weather is a hot topic of conversation, often hotter than the weather itself, and discussions certainly increased when Public Health England (PHE) updated its vitamin D advice in 2016.

PHE highlighted that the amount of sun – most people’s main source of vitamin D – people in the UK should be getting, and are not getting, during the winter months is not sufficient to provide the optimum amount of vitamin D. Since then, there has been a steady increase in sales of the so-called sunny supplement as people look for the vitamin elsewhere.

Vitamin D helps to control the amount of calcium and phosphate in the body, which are needed to build healthy bones, teeth and muscles. PHE recommendeds that children and adults in the UK over the age of one year should consider taking a daily supplement containing a minimum of 10mcg of vitamin D, especially in the autumn and winter months.

For those suffering from a vitamin D deficiency and at-risk groups, including people who have little exposure to the sun, such as people in care homes, it is recommended that a vitamin D supplement should be taken throughout the year.

Pharmacy staff can ensure they emphasise the importance of vitamin D to customers throughout the year and recommend appropriate supplements, particularly for at-risk groups and during the winter months. This conversation can also act as a gateway to discussing further VMS options.

The potential for pharmacy staff to play an important role in the sale of supplements is only set to increase. Now more than ever, as people increasingly turn to flexible diets, it is vital that pharmacy teams are able to provide quality advice to customers and ensure they are choosing safe and effective options to supplement their diets.

“Most importantly, people should be buying quality brands, going to a pharmacy and asking for advice, not purchasing vitamins off the internet, which can be unsafe,” says Emma. “There can be confusion around which vitamins and minerals supplements to be taking, and this is where pharmacy comes in. Pharmacy staff should be there to provide advice in this area.”

Emma does however sound a word of caution: “The benefit of taking supplements is that they enable you to top up gaps in a diet, however, they will never be a replacement to a healthy and balanced lifestyle.” Providing advice on healthy eating therefore remains crucial.

Emma also points out that it is the Government’s responsibility to be aware of how diets change and update the relevant guidelines, which should then be relayed to pharmacies through appropriate channels.

Top tips that pharmacy teams can pass on to customers enquiring about dietary supplements include: 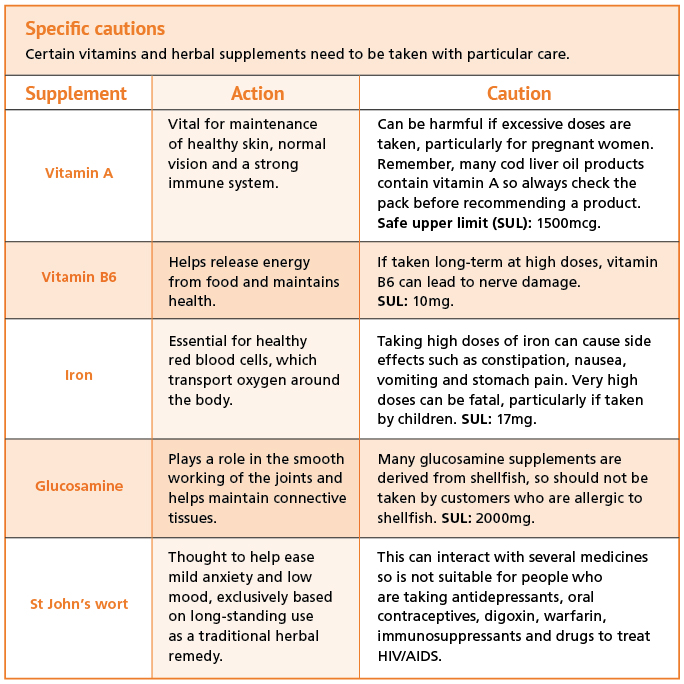