Statistics reveal a further decline in people lighting up, but there’s still much to be done before the UK is smoke-free

Decline, decline, decline is the current direction of smoking in the UK. The number of adult cigarette smokers in England has dropped by around 1.8 million from 7.7 million (19.8 per cent of the population) in 2011 to 5.9 million (14.4 per cent) in 2018. This is according to new figures from NHS Digital in its new Statistics on Smoking, England: 2019 report. Smoking has even been overtaken by obesity as the leading cause of four types of cancer. 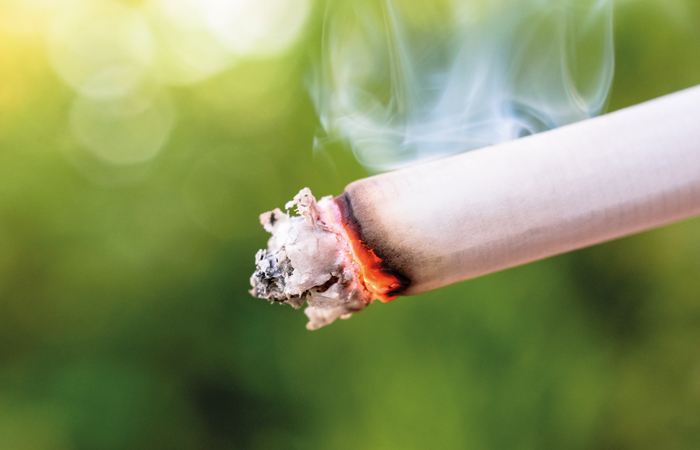 But don’t be fooled, smoking remains a serious public health concern. Hospital admissions attributable to smoking have risen by one per cent, and approximately 10.6 per cent of women continue to be smokers at the time of delivery. Smoking continues to be the world’s leading cause of preventable death year on year, killing more people than tuberculosis, malaria and HIV/AIDS combined, according to the 2019 Foundation for a Smoke-Free World.

Progress is clearly being made in reducing the numbers of smokers in the UK, but these figures demonstrate that there is still much work to be done to help the remaining population of smokers quit. It is thought that smokers are four times more likely to quit with NHS help – pharmacy’s time to shine. Even if some pharmacies don’t have a stop smoking service, pharmacy teams can still help by starting conversations with customers who smoke and being there to provide information and support people through the process of quitting.

Pharmacy teams can help to identify customers who are smokers and then assess their dependence on cigarettes. This can involve nothing more than a brief conversation, but could help someone to start thinking about quitting. To get conversations started, the National Institute for Health and Care Excellence (NICE) recommends asking questions such as:

These types of questions can help to identify people at risk, work out an individual’s dependence and encourage people to start thinking about the impact smoking has on their health.

Stopping smoking may seem like an impossible task for some people, but pharmacy teams can be there to provide reassurance to customers. The body starts to recover in as little as 20 minutes when a person quits smoking, according to the Royal College of Nursing. Fast facts like this may help people see quitting as more manageable with small steps seen as manageable goals. Including information like this on posters, booklets and leaflets to take away in the pharmacy can also help to spark conversations.

Once these conversations have begun, pharmacy teams can ask customers who smoke why they want to stop. They can then be on hand to offer reasons why customers should stop smoking. These might include:

Tobacco smoke contains nicotine, which is highly addictive, and over 5,000 other chemicals. These cause around seven out of 10 cases of lung cancer, as well as other cancers in the body, according to the NHS. Not only does smoking affect an individual’s health, passive smoking can damage the health of those around them. This can often be motivation for quitting, so pharmacy teams should make smokers aware of all the health risks that can affect them, as well as their loved ones.

Last year more than 61,399 women were still smoking at the time they gave birth, despite smoking during pregnancy increasing the risk of a variety of health complications such as stillbirth, premature birth and miscarriage, according to the NHS.

Pharmacy teams can raise awareness about the additional health risks of smoking whilst pregnant and be there to support mums trying to quit.

Some people find quitting easier than others, and different methods work for different people. For example, only three in every 100 smokers manage to stop smoking permanently by quitting cold turkey, says the NHS. If every smoker is different, every smoker’s plan to quit should be too.

Darush Attar-Zadeh, independent pharmacist and smoking cessation expert, says: “There is no one-size-fits-all approach when it comes to helping individuals on their smoking cessation journey. Smokers don’t like to be told to stop, they like to know what options are available to help them to stop and that you’re always there to listen. With support and treatment, you’re four times more likely to stop and stay stopped”.

Pharmacy teams can suggest that customers try quitting with someone as a means of support. When someone has quit, teams can also suggest other lifestyle changes that could help improve health and manage addiction, acting as a distraction. Such as: 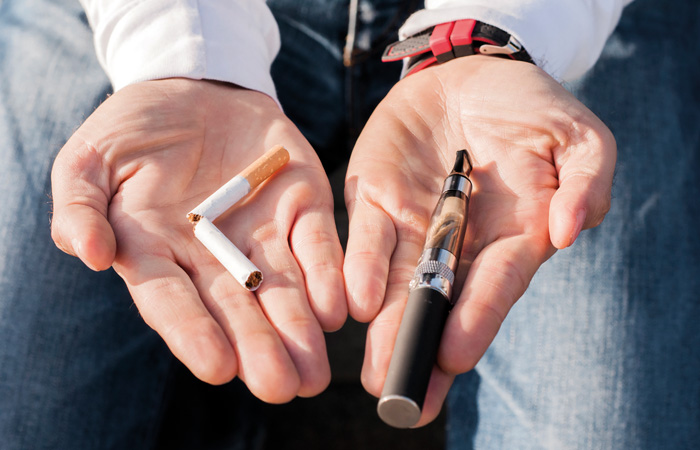 Tobacco smoke contains nicotine, which is highly addictive, and over 5,000 other chemicals

One of the hardest things about quitting smoking is dealing with cravings. Often people find it easier to curb their nicotine addiction with some kind of replacement medication. “Smoking is not a lifestyle choice; it is an addiction and needs to be supported as such with medical intervention – both pharmacological and non-pharmacological,” says Darush. “No other intervention will have the same level of impact on a person’s mental and physical health and reducing smoking rates will save the NHS up to £890 million each year. Pharmacy is well suited to offer this support service to patients with NRT being available conveniently OTC,” he adds.

NRT provides relief from nicotine cravings by reducing withdrawal symptoms such as headaches. NRT comes in a variety of options, such as gum, patches, lozenges, microtabs, inhalators, nasal spray, mouth spray and oral strips. This means there should be an option to suit most people.

Pharmacy teams can let customers know that other medications are available with prescription. Zyban (bupropion) and Champix (varenicline) are alternatives to NRT in helping customers stop smoking. Champix may also be available through a pharmacy’s stop smoking service.

There are now over 1.5 million people in the UK who have successfully stopped smoking with the help of e-cigarettes, according to the British Lung Foundation (BLF). Although not everything is yet known about e-cigarettes, they are still thought to be significantly less harmful than smoking and can be a helpful option for some people. 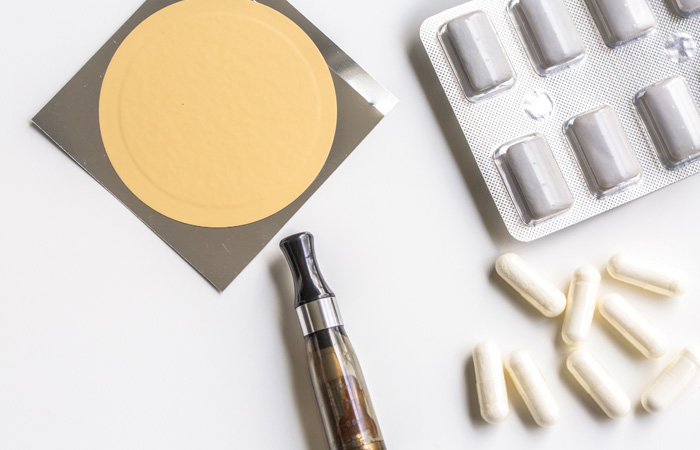 RoE Awards finalist Lisa Archer shares some top tips for running a successful smoking cessation service and demonstrates how even in the changing climate, pharmacy teams still have a big role to play in helping people quit

Smoking habits in the UK are definitely changing. Dispensing assistant and healthy living advisor Lisa Archer from Fields Pharmacy in Brighton was highly commended in the Healthy Living Advisor category at this year’s Recogniton of Excellence Awards. She says vaping is especially prominent in changing pharmacy’s role in smoking cessation.

“I must admit though recently, because everybody’s vaping, you don’t get as many people now walking in, asking or even buying NRT as much”, she explains. But this means that pharmacy teams now more than ever have a responsibility to start conversations about quitting. Lisa adds: “It’s up to us to ask people do they smoke”.

Lisa has had much involvement in smoking cessation services, Stoptober and National Quit Smoking Day and she even attends smoking update meetings three or four times a year.

In the pharmacy Lisa says the smoking cessation service includes an initial chat, getting to know the customer and their habits. She asks questions such as how long they’ve smoked for, how many cigarettes they smoke a day and what products they might be interested in using. Nicotine replacement therapy (NRT) comes in many forms and some forms may be more popular than others, such as the inhalator being preferred by people who miss the sensation of holding something.

Lisa says: “Then they themselves have to set a quit date. They can set it that day, or the next – just in the first week – it’s up to them. At the initial appointment we can give them some products to go away with. But it’s important for us on the quit date or just after, to ring them, or they come in, to see how they’re getting on.” She adds: “After that they can come in every two weeks, as you can give two weeks supply of NRT”.

The smoking cessation service lasts for a three-month period, but Lisa says: “We aim to have them quit within four weeks, which is the important part, you need to get a four week quit.” She adds: “We also do carbon monoxide reading each time they come in – that’s quite good motivation for them because you need to get to zero”. Setting small goals such as this can help motivate people week by week and even day by day.

It’s hard to tell them what to do, but you can give them ideas to help them

Each person’s journey to quitting smoking is different, but pharmacy staff can be there to provide support and suggest ideas. Ultimately success is not the responsibility of the pharmacy staff, the majority of this responsibility lies with the customer, but pharmacy staff can be there when it matters most. “[In terms of a plan], they have to tell you. It’s hard to tell them what to do, but you can give them ideas to help them. Such as putting aside money in a jar that they would have otherwise been paying for cigarettes with, so they can buy themselves something nice,” explains Lisa.

Certain times of the year can encourage more people to quit, such as Stoptober. Lisa says: “New Years is always a big thing, people always want to quit then but it makes it harder, because people put a lot of pressure on themselves”. Customers should be encouraged to quit all year round and Lisa adds that they have leaflets out throughout the year as part of their Healthy Living Pharmacy work. Having a constant smoking cessation presence in the pharmacy will not only be a useful hub of information, but also a reminder that can help to encourage people to quit at any time and in their own time, without unnecessary pressure. 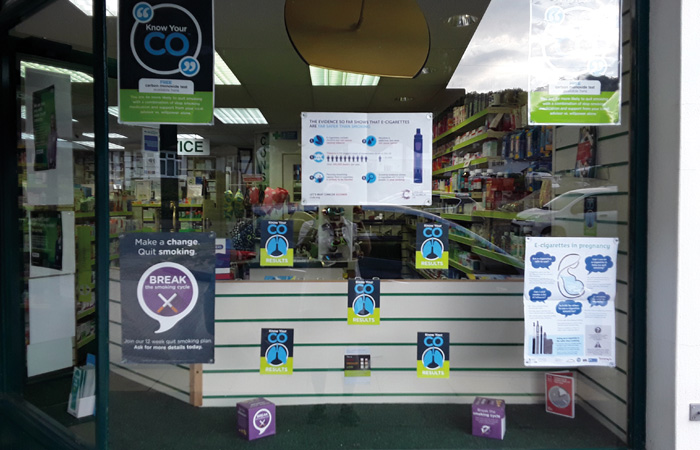 Up for the challenge?

Stoptober is an annual campaign from Public Health England (PHE) that takes place every October and is regarded as one of the biggest stop smoking challenges of its kind, with nearly a million people having taken part since the campaign launched in 2012.

Research suggests stopping smoking for 28 days makes quitting five times more likely, so Stoptober involves a 28-day stop challenge to encourage and support smokers towards quitting for good. So Stoptober is the perfect opportunity for pharmacy teams to encourage customers to try giving up smoking.

This year, launching on 19 September, Stoptober is back for its eighth year to help smokers split up from their relationship with smoking. For 2019, the campaign has launched a new Stoptober Support Group on Facebook which encourages smokers to swap tips on quitting and stay engaged and motivated with other quitters. New digital resources are available to download including toolkit and activation guide, graphics, social media posts and digital banners (available 19 September).

Pharmacy teams can also promote National No Smoking Day, which takes place in March every year. It aims to raise awareness of the risks of smoking whilst celebrating those who have quit and encouraging those who haven’t to give it a try.