Chocolate may be classed as a guilty pleasure for many, but research suggests that it can do more than just add inches to our waistlines and in fact has the potential to do good rather than just harm

We’re a nation of chocoholics. On average, people consume 1.5 tons of chocolate during their lives – about the weight of a female hippopotamus. A 2018 survey of 2,000 adults in the UK, sponsored by VoucherCodes, found that the average person typically eats 8,719 chocolate biscuits or cookies, 7,004 bars of chocolate, 668 slices of chocolate cake and 104 Easter eggs, as well as drinking 3,000 mugs of hot chocolate, in their lifetime. 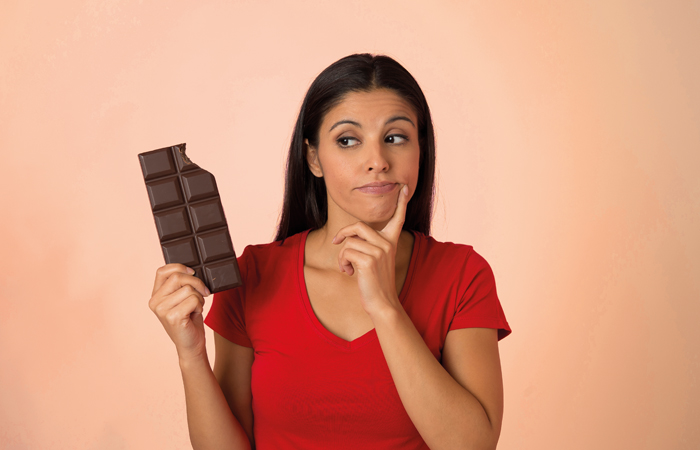 But a growing number of studies suggest that cocoa may reduce the risk of heart disease, strokes and type 2 diabetes, and even protect your hearing. So, is chocolate really good for our health? How can you avoid having too much of a good thing? And, as chocolate’s health benefits often capture the headlines, what can pharmacy teams tell customers?

The chocolate tree (Theobroma cocao) grows 50 to 100 pods a year directly from its trunk. Each pod contains between 20 and 40 bitter-tasting seeds; chocolate’s raw material. Nature Ecology & Evolution recently reported that archaeologists found traces of chocolate from bottles and cooking utensils dating from some 5,300 years ago in the Upper Amazon. Ancient South Americans are thought to have eaten the seeds and fresh pulp, made a juice and even brewed an alcoholic chocolate drink.

Chocolate has a similarly long history as a medicine. Ancient Mayan healers mixed chocolate seeds with peppers, honey and tobacco juice to treat, for instance, skin problems, fevers and seizures, according Philip Wilson and Jeffrey Hurst’s book entitled Chocolate as Medicine. They applied cocoa flowers as a dressing for sore and injured feet, and included chocolate in drinks to alleviate stomach disorders, diarrhoea, coughs and fatigue.

Early pharmacists dispensed chocolate as a restorative and tonic to improve strength, aid digestion and treat lung disease. In addition, theobromine – a chemical from cocoa – is a bronchodilator and suppresses cough. According to Wilson and Hurst, early pharmacists warned that excessive chocolate consumption could keep people awake at night: 100g of cooking chocolate contains roughly the same amount of caffeine as a cup of instant coffee.

It’s important to remember, however, that modern bars bear little resemblance to the way predecessors consumed chocolate. “Historically, cocoa was consumed as a bitter drink that contained ‘grit’ from the seeds,” says dietitian Duane Mellor, an expert in the health effects of chocolate and senior teaching fellow at Aston Medical School. In a paper in the Journal of Agricultural and Food Chemistry, Duane and colleagues note that added free sugars can account for 40-50 per cent of chocolate’s weight. Saturated fats can make up 20 per cent of the weight. “The sugar counters the bitterness of cocoa and the fat means the sweet melts in the mouth,” he explains.

The high sugar and fat levels in modern confectionary, the paper notes, created an impression that chocolate was unhealthy, possibly contributing to excess weight and diabetes – about 90 per cent of people with type 2 diabetes are overweight or obese. But, cocoa seems to lower blood pressure and unhealthy levels of fat in the blood (dyslipidaemia); improve the function of blood vessels; mop up tissue-damaging free radicals – chemicals that mean an apple left out turns brown; and reduce inflammation and insulin resistance, which is linked to diabetes. Indeed, some studies, including those performed by Duane, suggest that cocoa may protect against type 2 diabetes.

Chocolate also reduced stroke risk by 16 per cent in a study that followed 46,415 women aged 44 to 76 years for almost 13 years. The 38,182 men did not seem to benefit. Other investigations show that chocolate may reduce stroke risk by about a fifth. A recent study in Nutrients, which enrolled 3,575 people aged between 40 and 64 years, found that hypertension (high blood pressure) and dyslipidaemia – both important stroke risk factors – were less common in people who consumed chocolate (15.5 per cent and 6.9 per cent respectively) than in those who did not (21.1 per cent and 10.6 per cent respectively).

The study in Nutrients also suggested that chocolate may reduce the risk of unilateral (one side) or bilateral (both sides) hearing loss by 17 per cent, when comparing those who consumed chocolate than those who did not. Chocolate consumption was also associated with a 21 per cent reduction in the risk of bilateral hearing loss. The more chocolate people ate the greater the protection seemed to be. “The design of the study means it lacks the ability to prove that the chocolate caused the protection against hearing loss. In addition, the study did not measure intake over time to see if the rate of hearing loss changes,” says Duane, who is also a spokesperson for the British Dietetic Association. “We need more studies to prove the finding is more than coincidence and to determine a mechanism.”

Duane adds that chocolate’s health benefits in clinical studies are often modest and many trials have limitations. “Some studies suggest that chocolate reduces blood pressure. But these studies often included very small numbers of people, followed for short periods, who ate large amounts of chocolate – up to 100g per day,” he says. “In addition, depending on the product, if any, used for comparison, the same chocolate product can have a benefit, make things worse or produce no effect.”

Chocolate contains nearly 600 chemicals. Many studies attribute chocolate’s health benefits to a group of chemicals called polyphenols, which are found in the cocoa seeds. But the amount of cocoa in chocolate, and therefore the amount of the active chemicals, can vary dramatically. Modern chocolate is also highly processed. A technique called conching, invented by the Swiss chocolatier Rodolphe Lindt in 1879, mixes varying quantities of sugar, milk solids, cocoa solids and butter, as well as other ingredients, into a flowing suspension that is poured into moulds forming bars, Easter eggs and the countless other shapes on supermarket shelves. “There is no consistency in dose or composition of the products used in the studies,” says Duane. “Many studies used chocolate that is not the same as the regular bars in the shops, so it’s hard to say if the benefits would be the same”.

To complicate matters further, everyone’s body differs in the way that it absorbs, metabolises (breaks down) and responds to the chemicals in chocolate – much as they do to any drug. Duane comments that, for instance, the pH of the stomach (the acidity), the bacteria in the gut and gastrointestinal health may all influence the amounts of polyphenols that people’s bodies absorb.

Probiotics – drinks, live yogurts and supplements containing ‘healthy’ bacteria – stimulate the growth or activity of healthy bacteria already in the gut. Chocolate is a prebiotic and Duane says that this prebiotic effect might stimulate the growth or activity of certain bacteria. These may process and, in turn, change some of the properties of chocolate’s active ingredients. “This very complex process might help deliver some of the effects of chocolate,” he says. “But we need more studies.”

While there seems to be a modest health benefit, eating too much chocolate helps pile on the pounds due to the saturated fat and added sugars. Duane suggests eating no more than 20g of chocolate a day. “This is around 100 calories and can be easily planned into a healthy diet,” he says. “If you wanted the larger benefits reported in blood pressure studies, for example, the risk of weight gain from the extra 500 calories a day is likely to outweigh the benefits.”

And read the label. “Many people say go for a high percentage cocoa solid,” Duane points out. “But cocoa solid can include cocoa butter and the fat-free mass, which contains the polyphenols. Cocoa tends to make the chocolate more bitter. So, a bitter chocolate with a higher amount of cocoa is probably the best bet.

“Chocolate is interesting, but it almost seems like we are past the peak for intervention studies in chocolate, perhaps because of the public health focus on obesity, calories and sugar,” Duane concludes. “The most important studies now are to find the best way for us to enjoy chocolate, maybe with some small health benefits, but avoid the potential consequences linked to the calories and sugar. In the meantime, I would advise that people don’t bank on the health benefits, but eat a small amount for pleasure.”

Some studies into chocolate’s biological actions could lead to new ‘conventional’ medicines. For example, dietitian Duane Mellor, an expert in the health effects of chocolate and senior teaching fellow at Aston Medical School, notes that sodium-glucose co-transporter-2 (SGLT2) inhibitors such as dapagliflozin, canagliflozin and empagliflozin that are used to treat type 2 diabetes are chemically similar to polyphenols. Some polyphenols seem to improve glucose uptake by cells, which reduces blood sugar levels and so could help treat diabetes.

Certain polyphenols, such as epicatechin, in chocolate increase levels of nitric oxide – a gas produced by cells as a short-lived signal – which for instance, dilates blood vessels for a few seconds. Pharmacy teams probably dispense drugs that work on this pathway every day. Cells metabolise the angina treatments glyceryl trinitrate, which is placed under the tongue and acts rapidly, and isosorbide mononitrate, taken as a tablet with a longer duration of action, into nitric oxide. This dilates blood vessels and increases the blood flow to the heart, which relieves the crippling pain of angina.

Several studies suggest that chocolate may improve cognition – thinking and concentration – possibly by dilating blood vessels, which increases blood flow to the brain. Duane remarks that epicatechin increases production of nitric oxide, which keeps blood vessels open for longer. The same effect may account for the falls in blood pressure seen in several studies of chocolate. Experimental studies are currently assessing epicatechin for a range of diseases, including chronic kidney damage and a chronic, potentially fatal lung disease called pulmonary fibrosis. Further studies will need to confirm if patients benefit.