Jennifer Williams, known as Jen, has had a diverse career in healthcare, working for the NHS for over 21 years. Before she started in community pharmacy, Jen was a midwifery assistant for 12 years. She says this job was beautiful and one that she enjoyed very much, but due to beginning a small family of her own and finding night shifts more unfeasible, she moved to become a healthcare assistant in a doctor’s surgery. 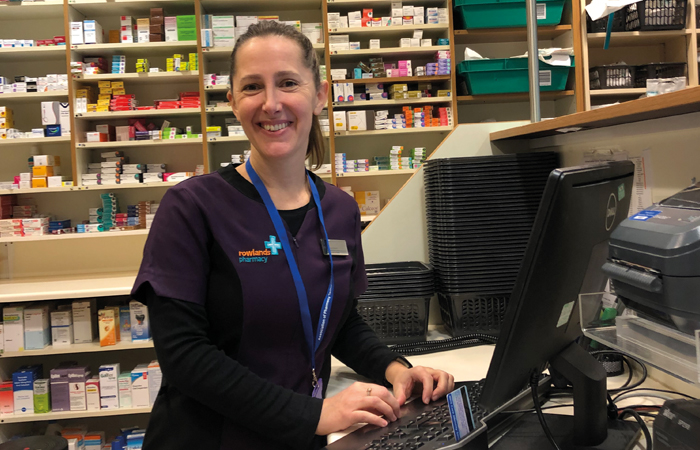 During this time she was diagnosed with myalgic encephalomyelitis (commonly known as ME or chronic fatigue syndrome) and fibromyalgia (chronic widespread pain) and had to leave the doctor’s surgery, and work altogether, for a year. But not working was never an option for Jen, who exerts a gentle determination. She began looking at her options and having a wealth of healthcare knowledge under her belt she soon found her place in the heart of Rowlands Pharmacy in Swindon, where she has now worked as a medicines counter assistant for four years. “I do 30 hours a week so it’s a little less hours than I was doing in my previous roles, it’s five minutes from my front door and I can walk to work, so these are really good, positive things,” explains Jen. “However, I thought it was going to be a nice little calm customer service job and it’s not that at all. I’ve never worked in a more challenging place in my entire career – it’s never dull, it’s very, very interesting and you face challenges on a daily basis”.

Working on the counter isn’t just about interacting with customers. More often than not, customers depend on the pharmacy team going above and beyond their roles to help, particularly when they’re faced with unforeseen issues such as medicines shortages or recalls.

Just recently Jen had to deal with the knock-on effect of a type of anaphylaxis pen being recalled. “I took control of that and was phoning the patients to make sure they didn’t have a dodgy pen and if they did, what needed to be done,” she explains. “As a result of that, this morning I’ve had a gentleman call to let me know if he wanted this other pen that we could get hold of, but it’s at a much lower strength”.

Jen soon had a plan of action to ensure the pharmacy had a stock of usable pens for customers that needed them. She says: “In the meantime, I’ve managed to create an account, with Rowlands’ permission, with the wholesaler to get them to deliver the pens to us via prescription. And when the gentleman came in this morning we were able to fix that up with him”.

This type of situation is what keeps Jen busy and the job exciting. “I’m never bored, I never clock-watch, ever. You blink and it’s time to go home. It’s fast paced and it’s not for the faint hearted but it is really interesting,” she says.

It is clear that Jen is learning how to manage challenging situations effectively. This can often mean intervening in a situation before it has even had time to cause the customer distress. And the team are in a special position to do so as the pharmacy is attached to a doctor’s surgery, with another one close by. Jen says the great relationship between the pharmacy and both surgeries means there is even more opportunity to ensure that customers get the best care.

“I think we are really fortunate to have a doctors surgery close by and to be attached to one. We’ve got a really good relationship with the doctors next door, which for our patients is brilliant because if there’s a problem, quite often we can intervene with something before the patient has even walked in through the door. Sometimes they don’t even need to know that [anything] happened until they’re here.”

For example, Jen has previously seen that capsules for a certain type of medicine have been unavailable, but tablets for the same medicine haven’t. So she took the initiative to contact the doctors asking them to make the switch to ensure the customer still received their medicine. Jen says she feels this can prevent a delay in her customers receiving their medicine and feeling any stress about the change in prescription, as they don’t have to do anything further, as long as they are happy.

Though she describes this role as a challenging one, it is clear it is one that Jen loves. “Every day is different and every day you learn something that you didn’t know the day before, without a doubt, like a new medicine that you’ve picked off the shelf for the first time. You’d think after four years how can that happen but it still does,” she explains. “I think you learn something about yourself every day too, how to deal with something in a different way than the day before or how to change. For example, speaking to a very varied customer base, so speaking to one person might be different to another person and you just learn to adapt these things.”

Jen is also in the process of completing her pharmacy technician training and says that after getting into the swing of the new role, she will start the accuracy checking technician (ACT) course next.

Jen has recently become a member of the Association of Pharmacy Technicians UK (APTUK), encouraged by the pharmacy’s accuracy checking technician Anna Hazelden, who is the APTUK Swindon branch chair. Jen says joining APTUK has made a huge difference to her pharmacy technician training. “For me, the biggest thing is if I’m trying to learn something I can go on their website and there’s loads of information. I can do quizzes and can access articles, or even email somebody for answers. For somebody who is training, it is really good for them to know [APTUK is] out there,” Jen explains.

An advocate of the support she has received, Jen encourages other trainees and pharmacy technicians to join the Association. She adds: “I’ve got access to course information, I’ve attended Swindon branch meetings, which helped with understanding revalidation. At the APTUK conference, I gained loads of information from that. It was really good I was really glad I did. It opens your eyes to what is coming and what is out there”.