Coming to community pharmacy so late in his career has not stopped David Perry becoming a dedicated and inspirational member of his close-knit team. His commitment to the community saw him definitively named winner of the Outstanding Contribution and Spotlight Awards

Dave Perry was “gobsmacked” when the TM team rang to tell him he had been nominated for the Recognition of Excellence Awards 2020. “I don’t particularly look for recognition – customers being well-served is my reward,” he said humbly at the time. “It would mean the world to win, but if I don’t that’s okay too.” 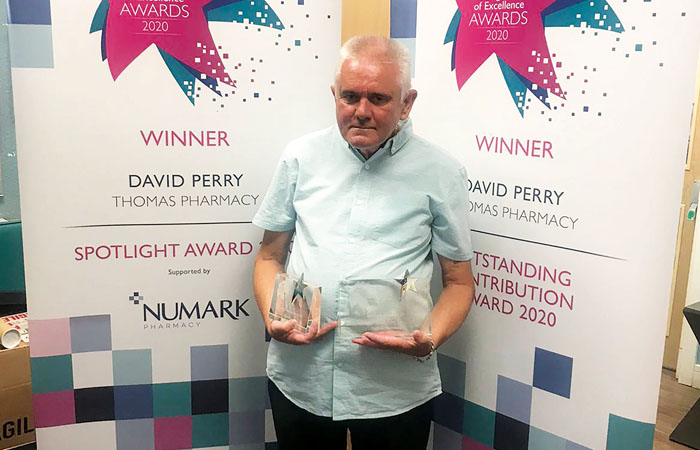 Well, not only did he win the Outstanding Contribution Award, Dave was also named our overall winner, taking home the Spotlight Award. Each year, this prestigious title goes to someone who excels in every aspect of their work in supporting customers and patients and stands out among all the other finalists. It was clear from the moment the judges scores started to come in that Dave had significantly impressed and that he would come out on top.

After more than 25 years working on the London Stock Exchange, first as a post boy and then as a trader, Dave moved to working full-time for a special needs outreach programme, alongside caring for his elderly father. Redundancy saw him on the hunt for a new job in 2012 and, having always enjoyed looking after people, he found a job at Thomas Pharmacy in Barking, east London.

Since then, he has become a well-loved and indispensable member of the team. “Everyone needs a Dave,” says pharmacist Reena Kanda in her Outstanding Contribution Award nomination. “This is the expression I use on a daily basis, I count him in my prayers and blessings. Twice. This man has indeed been a pillar of support and a rock throughout my highs and lows and many tumultuous times over the last eight years at the pharmacy.”

Dave consistently goes above and beyond what is generally expected of a pharmacy assistant. He proves that members of the support team are often the foundation of a successful pharmacy, being the first port of call for customers and patients, picking up on issues and finding solutions.

Among a plethora of examples given in his entry was that of a patient who had problems getting her medication on time and was unsure as to why her doctor had changed some of her items. Dave quickly stepped in to help. He went to the surgery to collect the prescription, got it filled and delivered it himself. Now this patient has become a regular and he organises and delivers her medication every month. The patient’s daughter rang Dave to thank him for his efforts.

Dave sees any problems that arise as a challenge for him to complete, his main focus being the wellbeing of his customers and patients. “It’s not just a job, I’m here to make sure that people get their medicines and are cared for. I have been told that I go beyond the expectations, but I don’t mind it, I enjoy it,” David explains. “On several occasions, I’ve finished work and a message has come to me on the work WhatsApp group that someone is without their meds, so I’ll go and deliver it. This could be an incredibly stressful situation for a patient, which I am happy to help out with. My job satisfaction comes from knowing that people have been looked after.”

Not only does Dave recognise the importance of making invaluable connections with customers, he has also carved out a unique role for himself within the pharmacy by cultivating invaluable links with local GP surgeries. Having these relationships enables him to quickly step in when a problem occurs, smoothing the process and ensuring patients receive their medicine quickly and correctly. “The first thing I do every day is prepare everything for the GP surgeries prescriptions and collections. We deal with 13 surgeries. I run a query folder for the prescriptions so any of the team members working in the pharmacy can note any problems with a patient’s medication and then I can sort out with the relevant surgery,” he says.

The judges also praised Dave’s trustworthiness, commitment and selflessness, which is especially apparent with deliveries. Being a local helps Dave navigate quickly through his delivery rounds, but he said he pushes himself to “deliver outside the area if needs be” and he often makes important drop offs out of hours, showing true dedication to his work and the customers who rely on him. Paula Woodgate, RoE judge and the 2019 Spotlight Award winner, comments that Dave is “a selfless and inspiring gentleman who shows true empathy and humility”.

Fellow judge and head of learning and development at the National Pharmacy Association Louise Baglole agrees, adding: “Well, words can’t describe how well-valued David is by his team and customers – a superstar! Well done for your contribution and making lives better for patients and customers, David.”

During the summer, Dave passed his medicines counter assistant course and joked to his colleagues that, as he’s into his early 60s, he’s probably the oldest person to qualify. “I feel very proud of what I have achieved,” he says. “I really enjoy learning and giving 110 per cent and I will always look at ways of improving.” Reena was so delighted with Dave’s success that she framed his certificate and hung it on the wall in the pharmacy – evidence that Dave isn’t the only one who is proud, his colleagues are proud of him too. And so is the TM team.

Together with TM’s events manager Liz Coop, editor Helena Beer delivered Dave’s prizes in person. She says: “I was thrilled to be able to present Dave’s prizes to him in front of his pharmacy colleagues – it was such a special moment. Liz, the judges and I were overwhelmed by his story and meeting him was even more humbling. It’s clear to see why he’s such a valued member of the team and local community.“

On receiving his prizes, Dave was lost for words, but clearly overjoyed. “I honestly can’t believe it. I knew something was up because Reena would never ask me to come in during my holiday without a good reason, but this is just amazing,“ he says. “I do this job because I just love doing it; I enjoy it, it’s as simple as that. This, well, it’s just the icing on the cake. These trophies are going to take pride of place.“

Next on Dave’s to do list is a sign language course so he can communicate properly with one of their customers who is deaf. “They are fantastic people, our customers, and they deserve it,” he says. This selfless gesture is a further indication of his generous character and evidence that he is utterly worthy of his RoE Awards success.

Liz Fidler, president of the Association of Pharmacy Technicians UK:
"David's application and managers nomination provide a plethora of examples of the valued role and how David does so much more than his paid role. Fantastic to have David’s skills, compassion and humanity in community pharmacy. Making a real difference to peoples lives daily."

Louise Baglole, head of learning and development at the NPA:
"Well words can’t describe how well valued you are by your team and customers - a superstar - well done for your contribution and making lives better for patients/customers."

Paula Woodgate, 2019 Spotlight Award winner:
"A selfless and inspiring gentleman. Shows true empathy and humility. I wish all pharmacies 'had a Dave'."

Richard Stephenson, chief operating officer at Right Medicine Pharmacy Ltd:
"A credit to pharmacy with such caring and commitment."

Richard Dunne, senior manager professional learning and development at Walgreens Boots Alliance:
"David show how important patient care is and how he delivers it throughout his role. A real testament to the profession."

Tim Rendell, board member and head of pharmacy at Day Lewis:
"Embodies 'outstanding contribution', really goes above and beyond."

Rekha Shah, CEO of Kensington Chelsea & Westminster LPC:
"Well, I cannot but agree and echo what his pharmacist Reena says of David – "Every pharmacy needs a Dave"!! Truly, if only this were possible…."

Salim Jetha, chairman of Avicenna:
"Shows that age is no barrier if you have commitment and dedication."

Ade Williams, superindendent pharmacist at M J Williams Pharmacy:
"It is often said that community pharmacy is the heart of the NHS that channels all the collective effort to the right place and on time. David is the epitome of this. Dedication, caring and continually developing expertise to help achieve more. Truly inspiring."