Believing that the key to successful leadership is being approachable and friendly, this year’s Team Leader Award winner Myra Gauntlett was described by her nominating superintendent pharmacist as “one in seven billion”

“I first started working in pharmacy 19 years ago as a Saturday girl,” says Myra. “And I soon realised that helping people is what I wanted to do.” Cancelling her university plans, she opted instead to study in the pharmacy, working her way up to accuracy checking technician (ACT) and “all the time gaining lots of experience,” she explains. 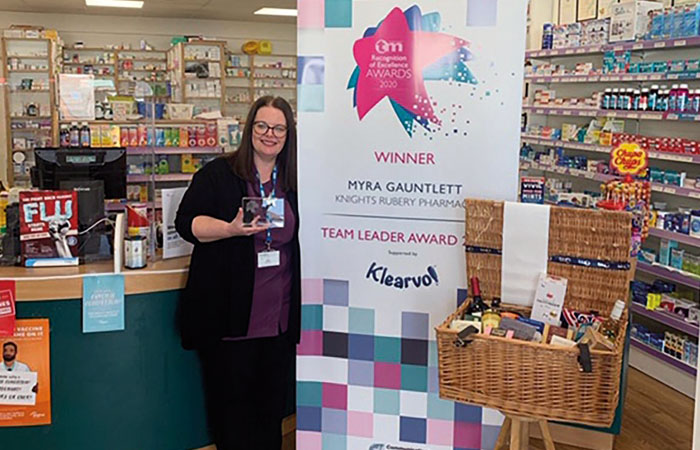 Most recently, Myra completed the NHS’ Mary Seacole leadership programme, which led to her current position as area lead looking after six Knights Pharmacy stores in the south Birmingham area. Myra still works as an ACT too, helping the group’s pharmacists in running their dispensaries, as well as supporting each branch with everything from staff recruitment, rota planning and appraisals to implementing new services. “I also work closely with head office teams and help with tasks such as annual complaints reports, mock inspections and flu and CPCS claiming,” she says. “I love working with all different teams and people.”

Eagle-eyed readers may recognise Myra from the inaugural RoE Awards. Back in 2014, she was named highly commended for Pharmacy Technician of the Year, but this year she went one step further by winning the Team Leader Award – and rightly so.

“Myra is everywhere and on top of everything. Her energy is infectious and she never gets flustered under pressure. Myra is one in seven billion,” Knights’ superintendent pharmacist Mohammed Kolia enthuses in his nomination.

As a team leader at the Rubery branch, Myra’s approach is to work with each individual, listening to them personally and building relationships. “By engaging with them, I feel like I can work best with the teams and we can give the best service to our patients,” she explains.

Myra also encourages her teams to take full advantage of all training opportunities. “Knights has a leadership pack to support new pharmacists and I have been spending a lot of time supporting the pharmacists with this,” she says. “I spend time each week in the branch with them going through each section, talking them through things like information governance. I have also carried out personal development plans with our staff members so we can work together to identify gaps in training and organise support for this.”

As has been the case for all frontline pharmacies, the Knights Pharmacy group has been tested by the Covid-19 pandemic. “As an area lead, I have been trying to provide as much support in the branches as needed,” says Myra. “Our staff have really stepped up and have all been amazing. They have all gone above and beyond to do everything they can… I’d like to believe that it has helped that I have built good relationships with all of the staff. I have tried to communicate with them every day and support them as much as I can.”

Myra’s ability to stay calm under pressure meant that Knights was able to step into the breach recently when two local care homes were told by another pharmacy chain that they could no longer provide services for them. “The care homes were in a very difficult situation,” says Mohammed. “But Myra was able to train her team and take on the care homes immediately, helping over 70 patients have a seamless transition.” Myra has also taken charge of information governance (IG) and Mohammed said that “recent GPhC inspections have shown that our IG has been impeccably followed by all stores, thanks to Myra”.

Upon receiving her award Myra said...

"I was delighted to receive my hamper yesterday – I had no idea I was the winner. It was a lovely surprise after a challenging year".