Amy Gordon goes above and beyond to ensure the retail side of her pharmacy succeeds. Even getting involved in the social side of things to expand the pharmacy’s reach as far as possible

“I’ve worked in pharmacy for four and a half years,” says Amy Gordon. “But what I’m doing now is definitely not what I started doing, as pharmacy grows the role changes, so it’s just complete and utter fluke!” Fluke or not, Amy was clearly born for her role in the operations team at Right Medicine Pharmacy (RMP). Indeed, as RoE judge and RMP COO, Richard Stephenson says in his nomination: “She is always looking at what works locally and looks to source new and exciting products for this.” 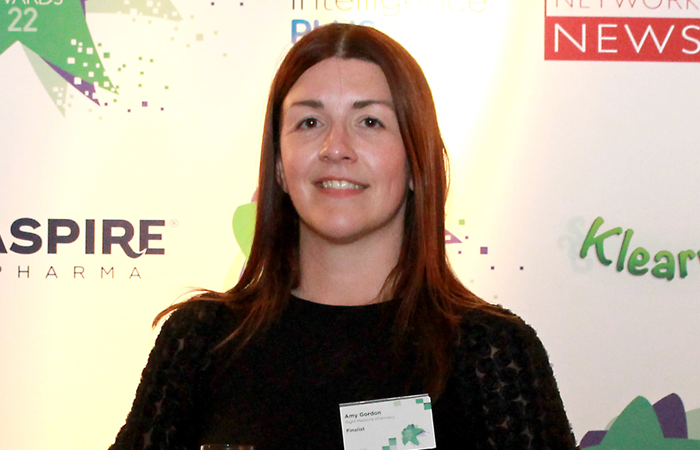 In his nomination, Richard highlighted the work Amy did on the ‘Dental Project’ in conjunction with Wisdom. “Amy had a great idea of how we could promote child tooth brushing in a fun way,” he says. “She arranged to run a promotion of the kids range of brushes, paste and mouthwash whereby, when an item was purchased, the child would get a sticker chart and stickers to make the process fun!”

Amy explains: “I just wanted to highlight a new fun way to make sure that kids brushed their teeth, kept them healthy and kept some kind of routine for them during lockdown when they weren’t at school.”

This idea went down a storm with customers. “We ran out of stickers so quickly, I was sure the kids were brushing their teeth constantly for the sake of a sticker,” she laughs. “The service side came into play as well as it highlighted the products that needed to be used but also made it clear that the customer could speak to any member of the pharmacy team for advice and guidance on oral health.

“It was a change in the norm for me in that I was getting involved in something that was being highlighted in the pharmacy, I had to ensure that the pharmacies had everything they needed and keep a regular stock of related lines topped up in the pharmacies, as well as sourcing extra worksheets and stickers. It was really nice to see something working so well in the pharmacy and being such a hit!”

Amy is a keen social media user opting to advertise the majority of campaigns via platforms such as Facebook and Twitter.

“It’s nice to see the feedback and how many people my posts reach,” she says. “A like goes a long way! Social media is also a great place to get feedback and we openly encourage customers to feedback to us on the service they’ve received in our pharmacies and what more we could do. It’s good to hear from them and helps us do our job better!

“We also like to offer monthly product highlights and promotions on stock based on the time of year. For example, Zoflora promotions for Spring Cleaning. Recently, a digital screen in our Hamilton store was installed. I create content for this and upload to the screen for display in the window. In making my displays attractive it encourages customers into the pharmacy to buy retail lines or use the pharmacy for their own needs,” she explains.

The judges loved the different ways Amy set about promoting products in the pharmacy. “I particularly liked the ways she had blended retail skills and public health messaging with the Wisdom Dental Project,” says independent contractor and pharmacist at S G Barai Pharmacy, Reena Barai. “Plus the use of social media to market the retail products too was really clever.”

“I loved how everything was tied to public health initiatives and using all forms of media,” adds LloydsPharmacy’s superintendent pharmacist, Victoria Steele, while head of marketing operations at Phoenix Medical Supplies, Emma Charlesworth says: “Amy’s breadth of knowledge and hard work shine through in this nomination.”