“A team leader who needs rewarding and celebrating” is how Jayne Bowen was described in her nomination and our judges clearly agreed, declaring her this year’s winner of the Team Leader Award

The decision to make Jayne Bowen team leader of Well Pharmacy in Newton Abbot is something area operations manager Kelly Holman, who nominated her for the award, considers to be “one of my best”.

“When I first met Jayne, she was an accuracy checking pharmacy technician,” she says. “Her passion for community pharmacy and patient care was clear. Kind, caring, empathetic and with natural leadership skills, Jayne has encouraged and developed her team, as well as herself.” 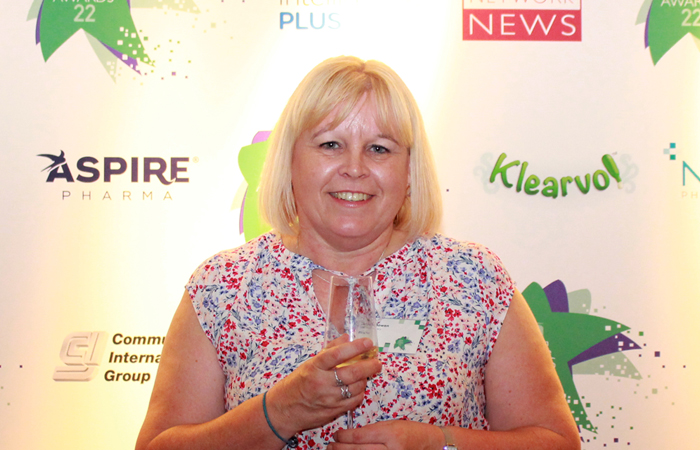 In at the deep end

Jayne’s move into management was quite the baptism of fire. “Right at the start of the pandemic, our pharmacy manager left,” she explains. “So, without any training, as the ACT I had to step up and support the pharmacy and lead them through the pandemic. In the end, it was really successful, and we are such a close knit, motivated team.”

Day-to-day responsibilities vary depending on where Jayne feels she needs to be. “I ensure that everything runs smoothly,” she says. “I am the point of reference for any queries, or training… or even complaints! Although to be honest, I’ve never had to deal with any of those.

“I just try to support the pharmacy and the pharmacist in any way I can, I am an accuracy checking technician, so I am able to relieve some of the workload, which is great. I can just be wherever they need, whenever they need.”

“Working alongside Jayne has been an absolute pleasure,” adds Kelly. “She is exactly the type of colleague everyone needs. Honest, conscientious, protective of her team and her customers. Under Jayne’s management the business has flourished in the last year. Regularly achieving all 12 key performance indicators each month.

“At this time, she has accomplished an increase of three per cent in prescriptions, eight per cent in OTC, four per cent in services against a challenging budget. Testament to her willingness to embrace change and implement new services,” says Kelly.

The pharmacy is situated in the middle of the small village of Kingskerswell in Newton Abbot, a place Jayne knows all too well. “I actually grew up in this village”, she says, “and it’s tiny, so even before I started, I knew about half of the customers. We have a really close relationship not just with each other but with our patients, we know them all by name – we’re definitely more than just a business to them”.

“Jayne provides outstanding customer service and patient care,” says Kelly. “She obviously always goes above and beyond expectation. I cannot recall a time during one of my visits when someone hasn’t come in to say thank you or deliver a card or gift.

“The pharmacy is never without fresh flowers or a sweet treat from grateful patients. An outstanding achievement considering the challenges pharmacy has faced in the last year.”

For Jayne, this praise is all down to the atmosphere created by the pharmacy. “The pharmacy is just such a happy environment,” she says. “I think that shines through to our customers and is what makes them come back to us time and time again.

“I am not a natural leader – it’s never been something I’ve aimed to be. Throughout my time, I have really learnt that people like to be treated the same as everyone else and if you create an encouraging atmosphere, then it means the best work gets done.”

The judges were impressed with Jayne’s humble commitment to her role in pharmacy. “Jayne is a top-performing leader whose humility only further amplifies her passion for her community and colleagues,” says lead pharmacist at Bedminster Pharmacy, Ade Williams, MBE. “Jayne says she isn’t a natural leader,” adds Reena Barai, independent contractor and pharmacist at S G Barai Pharmacy. “But her reference from Kelly shows the absolute opposite. Some imposter syndrome that needs tackling here!”