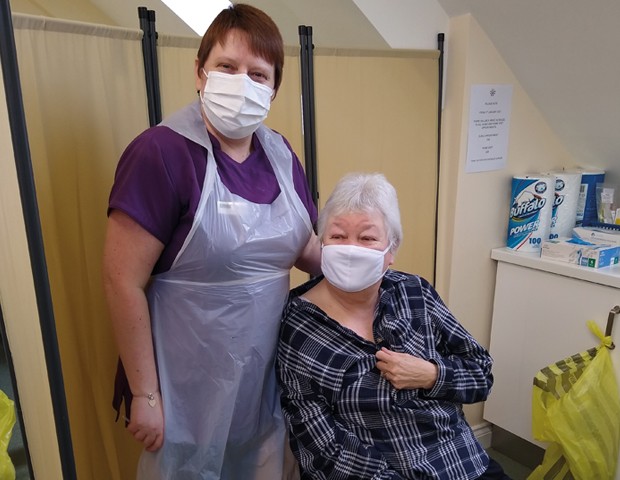 Pandemic protection: all hands on deck

In the last week of January, the bookings were starting to come in and the time had come to open the centre and start vaccinating. Still battling with my phobia of needles, the thought of vaccinating my first person was quite daunting and I definitely had a feeling of “I don’t know whether I can do this”. I even said to my colleagues that if I got in front of a person and couldn’t do it then I wouldn’t be pressured into it.

But I needn’t have worried. I was as prepared as I could be, and as a frontline worker, you’ve got to be there – it’s all about saving people’s lives. Once I got in front of that first person, I was absolutely fine and there were no problems. She asked if she was my guinea pig, and I came clean afterwards that it was true, she had indeed been my first vaccination. She told me that she wouldn’t have known, which was great to hear. And do you know what? I absolutely loved it! I was so proud of myself for being able to actually step up and do it.

As well as getting my first vaccination under my belt that day, I actually gave my mother-in-law Gill (pictured) her jab, too. It was really nice to make my vaccination efforts a family affair and be able to play a part in protecting her as well as the rest of the local community.

As well as myself and Diane, our other accuracy checking technician (ACT), we have six pharmacists who are part of our Covid-19 vaccination team. All of the pharmacists work for Knights, apart from one who is a locum from Leeds. She rang up when we were just getting started to ask if she could be involved and she’s become a great member of the team.

Our vaccination centre is open from Wednesday to Saturday, and we run two clinics each day between 8am and 8pm, with a break in the middle. We aim to see a person every five minutes so it’s a logistical challenge, but it’s going really well and we’re averaging around 1,000 vaccinations per week. The most we did one week was 1,250, but we normally average about 250 per day on each of the four days we’re open.

We have the Oxford/AstraZeneca vaccine – we haven’t used the Pfizer one at all – and there has been a really consistent supply. We either get 800 or 1,200 doses delivered every week and everything has always been here on time. We don’t have to make any orders, it literally just appears when we need it, which makes our life a lot easier as there’s so much to juggle.

The decision was made to not vaccinate on Mondays and Tuesdays so we can focus on the pharmacy and make sure that side of the business still runs smoothly. Diane and I take in turns to vaccinate so there is always one ACT vaccinating and one in the dispensary. We don’t want the pharmacy to suffer because we’re doing Covid jabs – there’s a fine line there.

The other thing that makes the whole system seamless is a big group of volunteers. I put a message out on the local message board ‘Birstall Matters’ saying that we were starting to do vaccinations and asking if anyone would like to help out. It went crazy and we’ve had about 30 people come forward to volunteer.

We have car park marshals and then several people doing the admin on an iPad, carrying out temperature checks, sending people upstairs to the vaccination rooms while making sure people don’t cross on the stairs to maintain social distancing, checking people are OK after their vaccination and then all the data admin – there’s so much for them to keep on top of.

The volunteers are an amazing bunch of people and they all get on really well. Other than giving them a piece of paper so they can sign up for the hours they want to work, we leave them to it. They all do a fantastic job, and we couldn’t do this without them.