When Fiona Spraggins won the RoE Team Leader Award in 2019, she said her aim for the future was to make her pharmacy into a real asset for the local community – a goal she has already managed to achieve

In May 2018, Fiona Spraggins had a challenge on her hands. She had just been appointed manager of the LloydsPharmacy store in Mildenhall, Suffolk, at a difficult time. “There was no staff morale but there were a lot of disgruntled patients,” says Fiona’s line manager Lee Doherty in his nomination. “Fiona helped form much-needed structure for the team and created a vision for the future.” 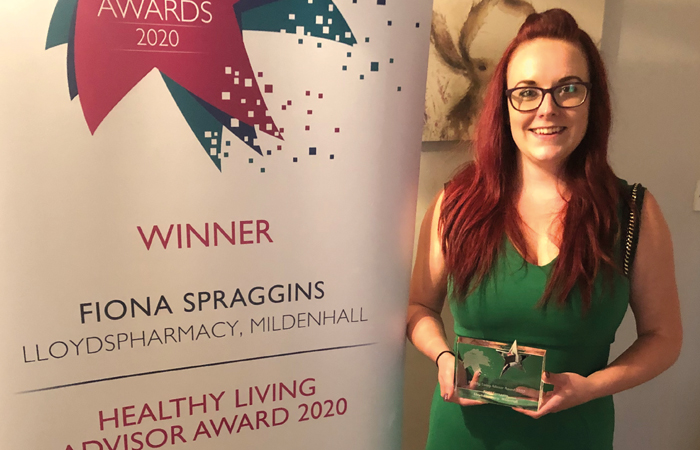 This vision was based around the Healthy Living Pharmacy (HLP) concept, which she believes is the way forward for pharmacy as a whole. “I had received HLP level one leadership training and was determined to make our pharmacy an asset to our community, which had been starved of a beneficial pharmacy, wellbeing and healthy living service,” says Fiona, who has since completed HLP level two training.

Fiona ensures the pharmacy offers a broad range of quality services that meet local needs. “We display and promote local and national campaigns and other relevant and important information or services,” Fiona explains. “We recently took part in the atrial fibrillation screening program and discovered at least two patients who could have been at risk. Urgent referral meant that these patients’ lives may have been saved due to the actions of the pharmacy.”

But for Fiona, HLP is more than simply providing health services. She says: “It’s collaborative empowerment of the local community and all those within to really make a difference.”

This is one of the reasons why Fiona’s team has organised countless outreach events in support of charities including the Alzheimer’s Society, Jo’s Cervical Cancer Trust and the Terrence Higgins Trust. “One of these events was in the name of a little girl in our community who has suffered since she was very young from several rare cancers,” explains Fiona. “Along with other business in the area, as a community and a joint effort, we managed to raise over £4,000 for Cancer Research UK – a potentially life-saving amount of money and an incredible feeling of satisfaction for the pharmacy team, the local community and businesses, and for the young girl herself to know that we are all making a difference.”

Lee says that before Fiona joined the team, HLP was a “very passive and minimalist” element of the pharmacy’s operations. “However, Fiona’s passion for HLP has seen her appointed as HLP lead for our cluster of 12 LloydsPharmacies and the health promotion zone in her pharmacy is a well recognised and effective public health information point.”

Fiona is also now pharmacy lead for Forest Heath District Primary Care Network (PCN), and she communicates regularly with Suffolk LPC, discussing HLP and service provision. “I intend to utilise my role to make all our pharmacies in my PCN district a benefit to the community collaboratively,” she says.

The progress Fiona has made has been featured in Public Health England’s HLP newsletter, and the team’s initiatives are shared within LloydsPharmacy “as a beacon of how a passionate and proactive leader can help change the public perception of community pharmacy as a place to access health and not just medicines”, says Lee.

Fiona is keen for those further afield to hear her team’s stories so they too can embrace HLP, aim high and benefit their communities. “I share the success of my team’s HLP achievements with anyone I can,” she says.

The judges could not help but be impressed. “Fiona has demonstrated great drive to make a difference in her local community,” says Richard Dunne, senior manager professional learning and development at Walgreens Boots Alliance.

Upon receiving her award Fiona said...

"I had to dive into the hamper before my husband got there – we have definitely been enjoying it. Thank you so much!”