Vaccinations have never been talked about as much as they are now, but with thoughts understandably on Covid-19, there are concerns that vital routine vaccinations may get forgotten

News of the various Covid-19 vaccine approvals is welcome indeed, heralding the possibility of an end to the restrictions that have dominated everyone’s lives over the past year. But those lockdown limitations also mean that many routine jabs may have been missed. Pharmacy teams have a role in raising awareness of what the World Health Organization has described as the intervention that has had the greatest impact on the world’s health, alongside clean water. 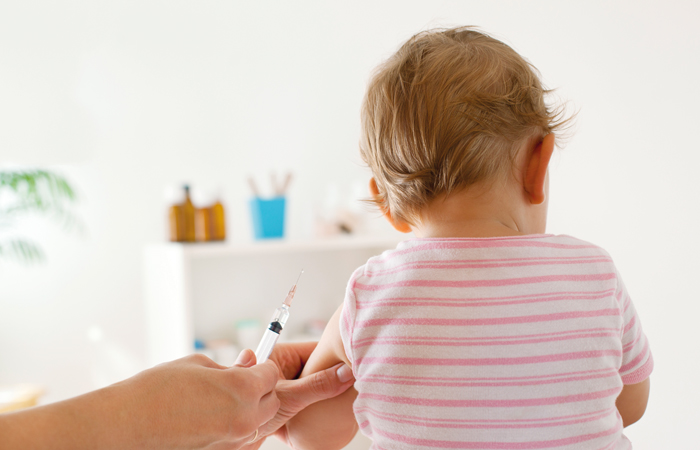 Despite the Covid-19 pandemic disrupting some healthcare services, the Joint Committee for Vaccination and Immunisation (JCVI) – an independent group of experts that advises the Government health departments – has urged vaccination providers to continue inoculating individuals as normal and in line with guidance. The organisation states: “It is important to maintain the best possible vaccine uptake to prevent a resurgence of these infections. Providing those attending for vaccination (including parents of babies) are well, are not displaying symptoms of Covid-19 or other infections and are not self-isolating because they are contacts of suspected Covid-19 cases, immunisation should proceed.”

The NHS routine vaccination schedule kicks in early, with the first doses of the 6-in-one, rotavirus and meningitis B vaccines offered to babies aged eight weeks of age (see Table 1 below for details of all vaccines mentioned).

By the age of two, all children are eligible for the seasonal flu vaccination, which is given each winter until they reach the age of 10. The UK Government keeps extending this upwards, with the ultimate aim of providing this annually to all children aged between the ages of two and 18 years.

Helen Bedford, immunisation lead at the Royal College of Paediatrics and Child Health, which is responsible for postgraduate and medical education including continuing professional development for doctors working in this important area of healthcare, comments: “We strongly encourage parents of children aged six months and older with health conditions, as well as two to 11-year-olds who are included in the routine programme, to have their child immunised against flu. Children and young people are largely spared the worst effects of Covid-19. That’s not true of the influenza virus – young children can become very ill and spread the flu to others.”

Vaccinations continue at various intervals throughout childhood until the mid-teens. Fewer vaccines are offered once children hit this age, but they are nonetheless important. The first that is offered during the teenage years protects against the human papillomavirus (HPV), which can cause certain cancers such as cervical, as well as genital warts.

The closure of schools to the majority of pupils as part of the UK’s initial lockdown measures to try and control the Covid-19 pandemic has had a significant impact on the HPV vaccination programme. Less than 65 per cent of Year 9 girls completed the course during 2019/20 compared to nearly 84 per cent the previous year. In addition, less than 60 per cent of Year 8 girls (compared to 88 per cent in 2018/19) and under 55 per cent of Year 8 boys received their first dose during the last academic year. Catch-up plans have been put in place, but pharmacy teams have an important role in encouraging young people and their families to engage with these – and discuss this with schools if necessary – to ensure they do not miss out on this crucial vaccine.

Anyone who does miss the HPV, 4-in-one or MenACWY vaccines in their teens can still receive them, usually at any point before they turn 25 years of age. Young people going to college or university in particular are urged to ensure they have had all meningitis and MMR jabs as outbreaks of infectious diseases can easily spread in such environments.

The charity Meningitis Now explains that this year’s drop in meningitis cases is due to lockdown and is warning against complacency. The charity’s chief executive Tom Nutt highlights that meningitis has not gone away and is “still a real and present threat”, particularly for young people. “The Covid dimension and the advice to self-isolate could be disastrous if the illness is due to meningitis, which can take a life in as little as 24 hours,” he says.

In adulthood, vaccine administration is generally focused on pregnant women and those aged over 65.

Pregnant women are offered two vaccines: seasonal flu to limit their risk from complications such as chest infections, premature labour and stillbirth, and pertussis to protect their unborn baby from the condition, commonly known as whooping cough, which can result in hospital admission, until the baby receives this vaccination themselves at eight weeks.

The Royal College of Obstetricians and Gynaecologists (RCOG) is unequivocal in its support for these two vaccinations, with clinical quality vice president Alan Cameron saying: “We understand some women may have concerns about receiving vaccinations during their pregnancy, but we can provide reassurance that the whooping cough vaccine is safe for use during pregnancy with no known adverse side effects
for mother or baby.”

The RCOG president Edward Morris agrees, adding: “We are keen to reassure pregnant women that flu vaccination is safe for women to have at any stage in pregnancy – from the first few weeks right up to their due date and while breastfeeding… The vaccine can also pass some protection to babies, which lasts for the first few months of their lives.”

In the UK, adults aged 65 and over are offered three vaccines at various stages due to an increased risk of complications from the diseases resulting from their age. The pneumococcal polysaccharide vaccine (PPV) and shingles vaccine are generally offered once, whereas the seasonal flu vaccine is given annually.

Public Health England (PHE) recently published provisional data on flu vaccine uptake for the 2020/21 season, which suggested that three quarters of people aged 65 years and older had received a flu vaccine – the highest for 15 years. “There is still time to get vaccinated against flu before it starts circulating in the community,” says Vanessa Saliba, consultant epidemiologist at PHE. “We are urging anyone who is eligible to take up the offer. By getting the jab, you can help protect yourself, your family and the NHS – it will help save lives.”

Pharmacy teams have an important role to play in spreading this message and encouraging eligible people to get vaccinated against flu as a matter of priority.

Some vaccines are only provided on the NHS for particular groups of people, including the following:

The Public Health Interventions Advisory Committee, which informed NICE guidance on reducing the persistent differences that exist in uptake of immunisations in under 19s, highlights that there are several reasons – over and above the impact of Covid-19 – as to why children might not be up to date with their vaccinations. The committee points out “logistical difficulties associated with large families”, as well as some children and young people not being in contact with primary care services. This includes “those who are homeless, asylum seekers and drug users (or whose parents are drug users)” and “children from minority ethnic groups and those whose first language is not English”.

Community pharmacies are often identified as one of the community hubs well-placed to promote and disseminate information about vaccinations and the importance of the childhood immunisation programme to children and parents of all backgrounds.

In addition to difficulties in accessing primary care services, some parents and carers may be anxious about vaccinating their child and hold off from doing so as a result. Anxieties can stem from a variety of sources, including erroneous reports that vaccines cause autism and other issues, contain toxic substances, can overload a child’s immune system or simply that “natural immunity” is better. These reasons are unfounded, and the fact remains that vaccines greatly reduce the burden of infectious diseases, have an excellent safety record and prevent two to three million deaths worldwide each year.

Anxious parents may need additional support, information and encouragement to ensure their children complete the vaccination programme. The University of Oxford’s ‘Vaccine Knowledge Project’, is a useful resource to signpost.

Pharmacy teams can also give information and reassurance to parents, such as: 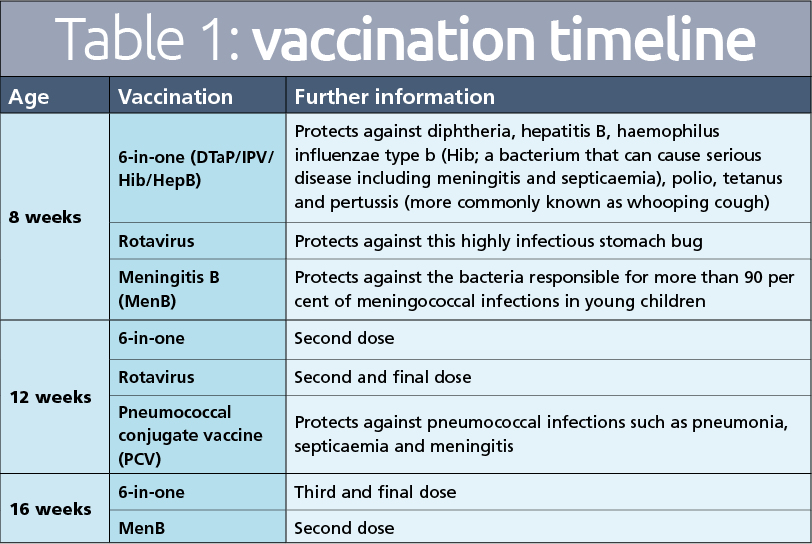 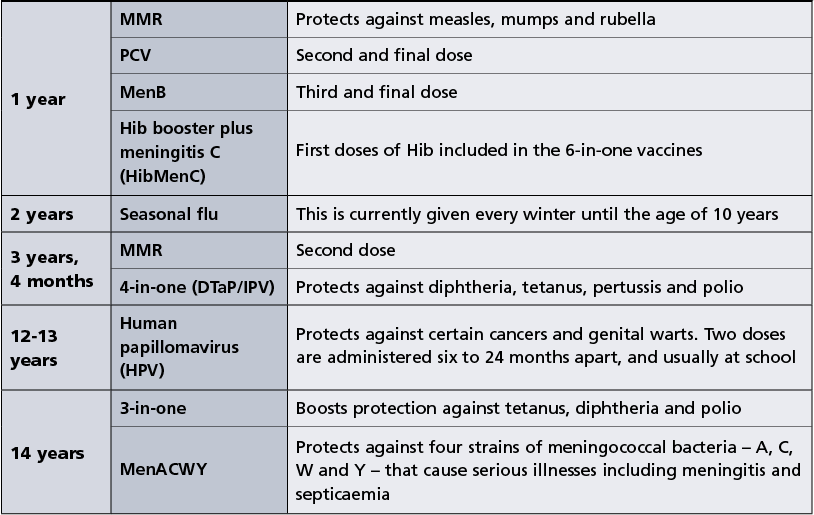 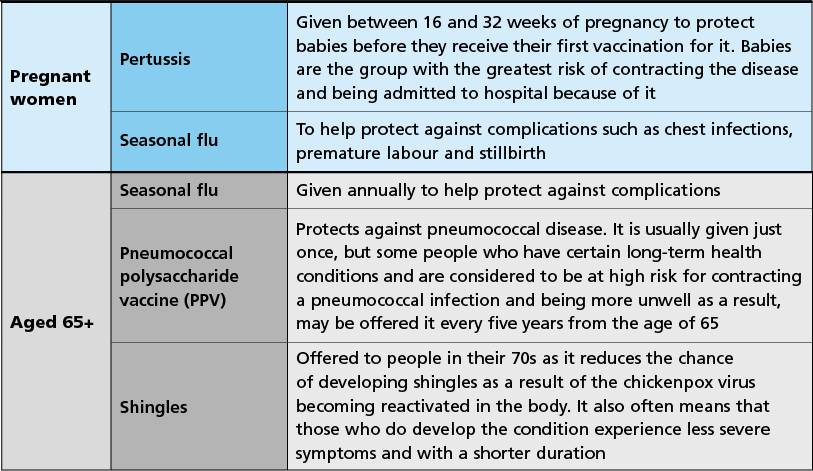